'i'm Sorry; He's Autistic. He Doesn't Understand.' I Offered Up Feebly. the Assaulted Customer Passed by Like a Cold Wind.

"Let go of my cart! I said, LET GO!" I heard the demand, but took several moments to register that it was aimed at my boy. Luke sat in the back of my cart happily smashing her cart into ours as she vainly tried to pass us in the grocery store aisle. I quickly moved his hand away, freeing her cart, as I registered the icy glare that said more than words ever could.

"I'm sorry; he's autistic. He doesn't understand." I offered up feebly. The assaulted customer passed by like a cold wind. My heart sank.

Behind her approached another shopper, momentarily distracted by jars of spaghetti sauce. Luke saw his opportunity and lunged for her cart. "You want my cart too, huh?" The second victim asked him playfully. She squeezed my arm as she maneuvered past us. "I have an autistic niece. I get it."

I have been the beneficiary of many simple acts of kindness from random strangers who "get it." Luke's autism greatly affects his ability to control impulses and emotions, but these kind people see that Luke's behavior is not an intentionally mean act directed at them, but the uncontrollable impulse of an autistic child. They see that what looks like the nasty tantrum of a spoiled child is actually an autistic meltdown, and they know that once he is in a meltdown, no amount of parental discipline will change this behavior because this is not a behavior that he can control.

During what should have been a quick trip to Target for emergency diapers, Luke spotted an end cap of Oreo cookies, and we were done for. Anxiety in the check-out line progressed to a full-on meltdown as we moved toward the door - minus the Oreos. In the back of the red, plastic cart, Luke hit and kicked, screeched inconsolably, and banged his head over and over. Considering both his safety and mine, I decided it would be best to let him cycle through the meltdown there in the cart rather than trying to remove his 90-pound flailing body. Customers passing by shot sympathetic glances my way. Several stopped to see if they could help. An older cowboy suggested, "That boy could use a dose of good, old-fashioned discipline." Another gentleman walked by and slipped a Snickers bar into my hand.

"Thank you, but he can't have candy." I responded, thinking his intent was to bribe my boy out of his tantrum.

"You misunderstand," he replied. "This is for you. It's from another mom who just checked out. She asked me to give it to you; thought you deserved it after going through this."

Yes, some folks just get it. They know that I am embarrassed and frustrated by my inability to control my son, but that I love him unconditionally. They know that behind the mischief and misdeeds is a sweet, kind boy who wants to be loved and treated just like any other kid. They know there is more to Luke than his autism shows.

This article was originally published on Bright Orange Balloons. It has been republished here with permission from the author.

Shanna is a wife and a mother to six beautiful children. She shares about the life of raising her son with autism on her blog, Bright Orange Balloons.
nextarticle 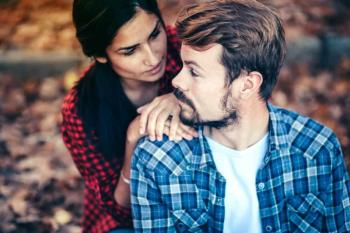 Why You Shouldn't Ask Your Husband to Help…