Drew Barrymore Says She Can Go “Years” Without Sex

Drew Barrymore speaks on her sex life as a single mom.

Actress and talk show host Drew Barrymore recently revealed on her talk show, "The Drew Barrymore Show," that she can go years without sex. The topic came about when her and her co-host, Ross Matthews, were talking about fellow actor, Andrew Garfield, and how he recently revealed his choice to abstain from sex for half a year as a way to adequately prepare for his role as a priest in the 2016 Martin Scorsese film, "Silence."

"What’s wrong with me that six months doesn’t seem like a very long time," Barrymore joked when Garfield's method acting practice was brought up. "That’s the headline: ‘Drew can go six months, no big deal,'" said her co-host to which Barrymore corrected him, clarifying that she could actually go "years" without sex.

The "He's Just Not That Into You" actress has been married three times, divorcing her last husband, Will Kopelman, in 2016. She was previously married to Tom Green from 2001 to 2002 and Jeremy Thomas from 1994 to 1995. She has two daughters, Olive, 9, and Frankie, 8, who she shares with Kopelman. In 2020, the actress told the "Today Show" that she was "scared" to find love again after her divorce. Earlier this year she opened up about the struggles of dating as a single mom on her talk show by saying, "I’m not there yet. I have two young girls, and I don’t want to bring people home. I think that it would take me a very long time to meet someone and get to know them before I could ever even introduce them to my daughters." She said for a long time that she convinced herself that it was her choice that she didn't date, but ultimately she said, "I don’t think I’ve said out loud that it’s really because I have two daughters."

While she appeared on the "Late, Late Show" with James Corden, they spoke about the period romance television show, "Bridgerton" where she called herself "old-fashioned" when it comes to romance. "I’m not really aggressively looking, but watching this old-fashioned show was weirdly this keyhole entry point for me to accept the modern world because I am so old-fashioned," Barrymore told James Corden. 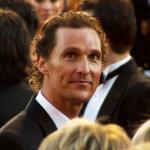 Matthew Mcconaughey Shares What His Parents Taught Him…