Father Publishes Loving Photo of His Wife and Kids; the Image Causes One of the Largest Social Media Controversies

A father in Oklahoma recently caused a viral wave on social networks thanks to a photo he posted on his Facebook page. The image that he published featured his wife lovingly sleeping next to her two young children. Though the post seems sweet and harmless, it spurred a massive war of opinions that the father surely never imagined would happen.

Where did the idea come from?

According to Huffington Post, it all began when husband and father David Brinkley heard his wife talking on the phone with a friend about sleeping in the same bed with her children. Brinkley's wife, Alora, had made the comment she co-slept often. Her friend responded in awe, saying her husband would hate it if she did that with their kids.

The comment that a husband would hate that his wife shares the bed with their own children surprised Berkley. It was then that he decided to take a picture of his wife taking a nap with his two children and post it on his Facebook page to make his thoughts known.

Berkley posted the photo showing his wife, baby daughter and two-year-old son. In the description, Berkley wrote a paragraph explaining his opinion on co-sleeping. His Facebook post has since been made private, but ABC7was able to get the quote directly before that change was made.

Berkley explained that he would never discourage anything his wife decides is best for their children. "It's true, sometimes I have to lie down in a corner of the bed," he said, but wrote that he loved seeing his lovely wife taking care of his children as they all slept together.

In his post, Berkley also explained that mothers can only enjoy this stage of their children for a limited time, and that men should not steal a single second of a mother's time with her children.

When it became viral

A photo of a mother co-sleeping with her children has gone viral and sparked debate.

According to the Huffington Post in less than 24 hours, the article had been shared 22,000 times and had more than 110,000 likes. Since being picked up by serveral news stations, the piece has become even more viral. Without a doubt, the photograph has grabbed the attention of thousands of people on social networks, some in favor and many against.

What people are saying

Many people angrily explained that babies should not sleep in the same bed as their parents because it poses many risks. "You have to be very careful with tiny babies like this who can't save themselves from being crushed or smothered" commentedone user.

These concerns are valid - some of the dangers of co-sleeping are that the baby may get stuck between the bed mattress the wall, may suffocate (usually caused by thick pillows and sheets on the bed), may fall out of bed, may be crushed by their sleeping parents or may die from sudden death syndrome. March of Dimes recommends parents let their babies sleep in a crib in the same bedroom but to never share the same bed.

However, many people also stood up for the proud husband and congratulated him for supporting the mother of his children. Lots of users mentioned what a beautiful picture this is. Many others commented how they themselves had slept with their babies and had never suffered a mishap.

Certainly many parents identified with Brinkley's photo, while others were very much against the picture and the practice. Do you think it is safe for parents to fall asleep with their babies in the same bed? 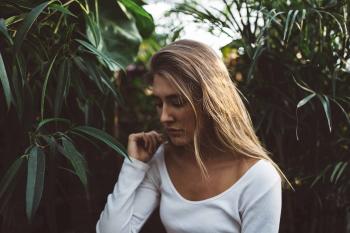 6 Things You Should Do When the Person…