How to Help Your Husband Feel Like a Man

Men Want to Be Treated Like Men. When Wives Do This It Causes Their Husbands to Love Them Even More. Here Are a Few Ways to Help You Wend Your Way Even Further into His Heart.

Men want to feel manly. There's a little macho in all of them. Most definitions of macho include the words courageous and strong. Men want to be that - and that's a good thing. Wives would do well to enjoy and build these characteristics in their husbands. It has long been said that to be loved by a man, help him feel good about himself. That would definitely include helping him feel manly. Of course, he must never be abusive to you or others in the use of his strength.

Here are a few ways a wife can help her husband feel like a man.

Allow, even expect, him to protect you

It is the natural instinct of men to want to protect the women in their lives. Even as little boys they've been known to punch anyone who says bad things about their mothers. They may get away with it themselves, but nobody else better try it. They are often equally protective of their sisters. When they marry, this protective tendency kicks into an even higher gear. So we strongly suggest to wives that you let him protect you. Enjoy it - he's made that way. When the door creaks at night, let him be the one to check it out. When you walk in slippery areas, let him support you by taking his arm or holding his hand. It helps him feel like a man, and it helps you feel safe. Let him know how much you appreciate feeling safe with him.

The muscle structure of men is different than women's, which naturally makes them stronger. Men are proud of their muscles, so notice them. When you squeeze his arm and feel that bulge, say, "Wow! I'm impressed!" When I see my husband carry heavy items for me - and I mean heavy - it always makes me marvel. I get a feeling of genuine gratitude for the strength my man has and his willingness to do heavy carrying for me. Of course, there are times when you can help, but allowing him to do the muscle stuff will help him feel like a man. By doing this you will also be protecting your body to do the things it was created for.

Allow him to be a gentleman

Too many women nowadays, in an effort to show their independence or equality, don't let their husbands do the gentlemanly acts. If he opens a door for you, let him, then thank him. It's a show of respect and love for you. If he has the umbrella and it's raining, let him hold it over you to keep you dry. Or when he snuggles close to share it with you, appreciate his gesture. A young woman shared with us that she loses interest in a guy quickly if he is not a gentleman. She said, "The man I marry will treat me like a lady and do the gentlemanly things." She in turn is working on being a lady, which inspires gentlemanliness.

There is much that denigrates men in the media. The message being put out is, "Men are not that important. We can get along without them." Men need to feel important, especially to you. Consult him on decisions and respect his views. Don't make fun of him. If he tries to fix the plumbing and it doesn't work, don't insult him with comments like, "Why didn't you just call the plumber? I knew you bit off more than you could chew." Instead, thank him for trying and let him know you appreciate his efforts. When he does a task and it has a successful outcome let him know how grateful you are for his ability to fix things. Some men are gifted at this and others aren't. That doesn't mean he is any less a man, unless his wife makes him feel like he is. Notice what he is good at and compliment him for it.

Don't try to make him into another girlfriend

If a man doesn't do feminine things in today's society many are looked down upon. That's sad. He's not supposed to be like a woman. For example, he's simply not going to enjoy chatting endlessly. Men seem to have fewer words than women do.

This became evident one day when my husband was fixing a broken pipe in the bathroom sink. He asked me to ride with him to get the new pipe at Home Depot. I'm not all that fond of home improvement stores, but I like to be with him, so I went. When we went in we found the plumbing aisle. He spotted a clerk and all he did was hold up the broken pipe to the man. The clerk said, "Toilet?" My husband said, "Sink." The clerk pointed and said "There." It was the dumbest conversation I had ever heard. I said, "You should have told him about our broken sink and then he could have told you about a time when he had a broken toilet. You missed a chance to have a nice conversation. My husband said, "What's the point? He understood and so did I." They are different than we are and it's OK. Let him be a man.

When a woman acknowledges the manly traits in her husband it increases his love and respect for her. See what you can notice about your husband today that will help him feel like a man. Then, tell him. He's sure to reward you by treating you even more like a lady. That's what makes marriage fun. 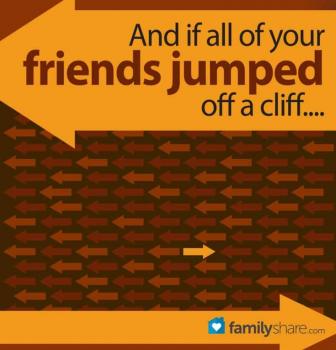 And if All Your Friends Jumped Off a…