Why I told my husband he could walk away

It Isn't Easy Leaving the Life You Once Lived, But in the End, It May Be Worth It.

Editor's note: This article was originally published on Ashley Hackshaw's blog, lil blue boo. It has been modified and republished here with permission.

"It is heartbreaking to see men waste their entire lives trying to convince other people that they are someone they are not. This is why men's soul's do not grow mighty in spirit and courage. They spend their existence covering up and living in fear they will one day be discovered as a fraud. There is a voice inside them that keeps telling them that in spite of all the ornaments they collect in life, they are still not OK. The results are a lifelong tension with guilt, shame and anxiety." - Jerry Leachman in the foreword of The True Measure of a Man

I read that almost exactly a year ago today. I was flying home from a trip to North Carolina in a book that I grabbed from the nightstand at my parent's house. As I read it I came to a note that my mother had written on one of the pages:

It said my dad marked that page on May 15. He died unexpectedly a few days later. Because of that I ended up paying more attention to what I was reading:

"Six million American men will be diagnosed with depression this year."

"Advertisers do not appeal simply to our practical, common sense but to our fears that we do not measure up."

"We give celebrities and media more and more power over our lives simply because of the images they project rather than the true values they represent."

On the plane ride home, I had an epiphany: We had set ourselves up for frustration, confusion and failure. We had a huge house and an even bigger mortgage. We had five flat screen TVs in our house for three people. We lived in an expensive city with expensive taxes. We built a huge pantry so that we could stockpile items from Costco just because we could. We built a huge kitchen for entertaining because we thought we were supposed to entertain and neither of us like to cook. We bought or leased a new car every three years. We sent our child to private school and bought her enough clothing that she'd rarely have to repeat an outfit. We ate at expensive restaurants because all of our friends did. We weren't necessarily living beyond our means but we were working to support our means. My epiphany was that I wanted to move the means.

Fast forward to one year later and here we are in the mountains of North Carolina. It wasn't easy, but it was freedom. We sold our house which, by the way, we lost money on. We left California with everything we owned in a 16-foot box trailer. On the long, slow drive cross country, we never once opened up the trailer. Instead we wore the same clothes day after day and did laundry in hotel sinks. (Conclusion: we didn't even really need what we'd brought in the trailer.) We took as many back roads as we could and we saw the true heart of America. The roads typically less traveled left us in awe.

It wasn't an instant decision to uproot our lives. I planted the seed and then we talked about it for months. But what really started the whole point of this post (long story long) is that once we started telling people about our big move we were surprised at how many people asked:

I could feel the expectations radiating from the questions. And sometimes our answers of, "He isn't sure yet," or, "He's going to be a dad and husband and help around the inn," brought even more questions and lack of understanding. This reassured us about our reason for doing what we were doing — especially for me. I wanted Brett to know that I just wanted him to be happy. I wanted him to know that I would live within whatever means we ended up with. I'm pretty good at doing laundry in small sinks.

I wanted him to know that he could walk away from his livelihood and I would never once make him regret it.

He was more than his work

Brett is a pretty simple man but he's a hard worker. He has been an investment banker and an owner of a construction company but he also finds the most joy in the simple things. He loves the outdoors, loves exercise and fitness, and loves to build things. He built me a bench the other day and invited me to come and sit on it. Best gift ever.

I've seen a weight slowly lifted off of him the last few months that reassures me that he's figuring it out. I have to admit I was worried about his feeling of identity if he walked away from what he'd built in the desert. But now, I overhear him talking with other men at the inn and they are asking for his advice on how to get out of their own rat race and my heart swells. Men asking how he got the courage to step away from it all. He tells them how he reads with our daughter every night and helps with her homework. He tells them how he's fallen in love with hobbies that don't cost a thing. He tells them how spending time with his family gives him more joy than he ever felt in a high powered, high paying job. MY HEART SWELLS. His step-mother Gale and his dad recently visited us at the inn for three days. When they left, Gale said she had never in her life seen him more content, more fulfilled.

One of the most freeing quotes I have ever read and I wrote it in the front of my journal in 2005 is:

I read it over and over again and a few months after reading that I quit my job at the bank. We walked away from a new country club membership we'd paid for. We sold our house to someone that we knew was just going to tear it down and build a house five times its size.

And now, years later, I never would have pictured us in this place. We crave the inconvenience of things that really aren't inconvenient at all if you think about it: running into town for mail, the nearest Starbucks is over an hour away, we have to take the trash to the dump. And there aren't any shortcuts over the mountains or across the rivers; you have to just enjoy the long curvy drives around them and along them.

And we haven't completely gone off the grid (yet). We do have a TV . . . it's a whopping 22-inch screen. I had to add the closed captioning because I can't hear it. Actually, I eventually just stopped watching because when I take my contacts out I can't see the screen.

Boo went back to a new school on Monday and she wore an outfit she's had all summer. We didn't purchase any new back to school clothes. She took last year's backpack, one that we bought at a yard sale. She made a friend. Her first day was perfect.

We live in less than 900 square feet and we make it work. We talk to each other, see each other and enjoy each other's company. We are a team.

Brett helps out around the inn sometimes with handy things he enjoys doing. Sometimes he'll venture into town to hang out at Bryson City Bicycles and watches the owner Andy repair and build bikes to learn a new trade. We spend lots of time getting to know the people that own the local businesses and try to support them as much as we can.

I spend a lot of time getting to know the staff at the inn. Brett drove three hours roundtrip today to pick up a new motor for a kitchen fan because while I sat with the cooks in the kitchen I noticed how overheated they were getting. Yesterday I overheard Donna tell her husband Wally, "You over salted that . . . put a tater in it," and I loved that she said tater, and at the same time taught me how to "un-salt something." And Wally said there are all sorts of medicinal plants in the woods that he picks and dries, including ginseng. I helped Harper "the intern" and George one of the other cooks load food into the freezer today. I've never seen so many eggs up close in my life.

Most importantly: God is the center of our lives. We've found a small local church that we all love. The church's tag line is: We are an OK church for people that are not OK. I love that. Because I've never met anyone that is truly OK. We all have our issues. We pray about everything, especially the things that are out of our control.

I think there is a reason that God led us to such a vast, beautiful place. There's something therapeutic about being surrounded by so much beauty.

Emerson said that in the woods we return to reason and faith. I feel like the more we are in nature, we live very much without a past and without a future. Around here, the nature is free.

Six million men minus one.

Ashley is the fearless creative behind the DIY/Lifestyle website Lil Blue Boo. Her writing about the unexpected loss of her father, her battle with a rare cancer and infertility has resonated with readers across the world. Most recently, Ashley and her family sold everything they own and moved across the country to a small, rustic 1950’s motor inn in the mountains of North Carolina. You can read about their adventures in small town life at www.lilblueboo.com.
nextarticle 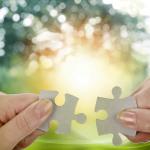 3 Ways to Build the Perfect Spouse For…