10 math holidays we need in addition to Pi Day

Pi Day is Awesome. There's Pie Everywhere, and People Pay Attention to Math. But There's Some Other Math-Inspired Holidays We Could Have Too.

March 14 is the day when your favorite dessert gets the praise it deserves.

Only it's not because everyone loves pie. Rather, it's to celebrate the number represented by pi (often seen as the symbol π or the number 3.14). The number is used for calculations involving round shapes, such as measuring circumference (2πr) or area (πr²).

As Quartz reported, pi - often meant to represent the number 3.14 (1592653589....) - was once thought to be 3.12 or even 3.16. It wasn't until 250 B.C. that the Greek mathmatician Archimedes found that the number was closer to 3.14. Similarly, Greek-Roman scientists found just 300 years later that the number was 3.1416. Since that time, scientists have only elongated the number. It has no official end point, but most researchers say 39 digits is enough to show its actual value.

So why do we have this holiday? In all honesty, it's because it falls on March 14 (3/14) and gives people a chance to eat piles of pies. Seriously, you can find deals across the country for various types of pies, including the ever-delicious pizza pies.

But there are other math equations that deserve a holiday too because of the impact they have on the world and our high school textbooks. We've collected 10 different math equations - most of which you probably haven't seen since middle school or high school - and outlined what a holiday for those equations would look like.

The equation y=mx+b helps students find the equation of a straight line. In this equation, m represents the slope and b is the y-intercept, which is the point on the graph where the line crosses the y-axis.

This equation is special because it can be represented as either "Ax2 + Bx + C = 0" or the way it appears in the image below:

This equation is used for a number of reasons, like factoring, completing a square or even graphing.

For this holiday, people would probably celebrate by walking on all fours, or by hanging out on the college campus quad all day. Restaurants would sell many 4 for $4 deals, and stores would offer buy four get four free deals.

It's one of the most memorable math equations out there: a2 + b2 = c2. And it certainly deserves a holiday since it's a fundamental equation that can help determine the geometry of a right triangle.

For Pythagoras Day, there would be triangles everywhere. Everything would be sold in different triangle-shaped boxes, and restaurants would offer meals shaped like triangles, too. Pizza would probably be on sale given its already triangular shape.

So there's an equation out there that helps you solve the square of an imaginary number. This equation is often represented as i2 = -1. Imaginary numbers are often used by engineers to solve problems while working without giving those numbers a unique identity. They're more often used in very complex math equations, according to Business Insider.

This equation obviously lends itself to Imaginary Day. Held on Saturday, people would celebrate by pretending to be whoever they wanted, like a springtime Halloween. Restaurants would charge randomly low prices to draw consumers in, and eyeglass retailers would offer a two-for-one deal on lenses.

This has to be one of the most famous math equations out there. E=MC2. It's meant to show energy = mass times the speed of light squared, and is often used to calculate and prove the theory of relativity.

For Relativity Day, gravity boots would be on discount. Families would eat for free - get it, relativity? - and everyone would be encouraged to search out their family history, even though familial relatives have nothing to do with gravitational relativity.

How do you find slope? Simple M = y2-y1/x2-x1. This equation helps you determine the line of the slope, and will show you what the incline of a particular line would be.

Slope Day would probably be held in the winter, so that children could slide down hills and slopes on sleds. Ski resorts would have discounted prices (or some sort of deal that's still expensive but has the tagline "Have a slopein' good time!').

GOP front-runner Donald Trump would use this day to talk about the tremendous slope America is falling down. He would also say he has the best slopes, and no one fixes slopes better than he does.

We see these three words a lot in trigonometry, so they surely deserve their own holiday. They're often used to find the unknown sides of angles.

For a holiday, people would pledge their allegiance to a particular function, either Sine, Cosine or Tan. You'd see people dressed in shirts with either a S, C or T on it. People would declare their allegiance on social media with either #TeamTan, #TeamCosine or #TeamSine. And of course there'd be some viral video of a man named Tan Daniel, in which a kid in white vans who's extremely tanned would be called "Tan Daniel."

Sign stores would sell discounted signs, mortgages loaners and banks would offer less interest for those with cosigners, and tanning salons would have free tans for people who brought a guest with them.

And, as we all know, Starbucks would sell a drink called the Tan, which would be a coffee-free, milk-based, sugar-filled frap of caramel.

There's an equation that says the number 0.9999999999999 = 1. It's actually mathmetician Steve Strogatz's favorite equation, according to Live Science.

"I love how simple it is - everyone understands what it says - yet how provocative it is," Strogatz said. "Many people don't believe it could be true. It's also beautifully balanced. The left side represents the beginning of mathematics; the right side represents the mysteries of infinity."

And let's be real: $0.99 Day almost writes itself. Just imagine a day where everything everywhere only costs $0.99. What a time to be alive. Though it's doubtful all stores would do it, you could definitely imagine dollar stores knocking a cent off their price just for the heck of it.

Want to measure the area of a cylinder? Use the equation 2πrh+2πr2. It's a little complicated, but it'll help you.

As you can see, there's a number 2 in front of each of the π symbols. So this could be a holiday dedicated to double the pie. Basically, you get twice as much pie and twice as many deals. Or, it could be Cylinder Day, where restaurants will put their food in the shape of a cylinder. Double the pie sounds better.

The equation 2πR helps you find the length of an arc.

For Arc Day, the St. Louis Gateway Arch would have discounted events and activities, because why not.

Any store or company with the initials ARC would also offer special deals to consumers.

And let's not forget that any filmed version of the Noah's Ark story would be discounted. Similarly, the hashtag #WhatMyArkWouldLookLike would trend on Twitter worldwide.

And Trump would say no one builds arcs/arks/arches better than he does. 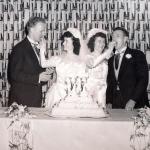 6 Slide Photos That Prove How Much Weddings…