Autism is a Developmental Disorder Affecting the Areas of the Brain That Affect Communication and Social Skills.

Autism is a developmental disorder affecting the areas of the brain that affect communication and social skills. Usually appearing in the first three years of life, most parents may notice something by the time their child is 18 months and seek help by the time the child turns 2. Other children may progress normally through age 2, then suddenly begin losing language and social skills they had previously developed. Here are some signs of which to be aware:

A child with autism may struggle in particular areas that seem to come "easy" or "naturally" for other children. The most affected areas are communication skills and social skills. When alone, an autistic child may struggle with pretend play differently than other children.

Because sensory input is processed differently in autistic children, you may notice hypersensitivity in your child to light, sounds, textures, tastes, or smells. Your child might not like certain textures in blankets or clothes, or only like carrots if they are soft, or prefer wearing sunglasses when outside. One mom had behavior problems with her toddler son until removing all the tags from his shirts.

Sometimes the opposite of hypersensitivity happens, and the autistic child has such a low threshold of sensory input that they sometimes put themselves in danger. One kiddo would not wear coats because he didn't realize how cold it was outside, so his parents had to limit outdoor playtime. Another family had a rule of parents starting the shower and bathwater because their daughter would often burn herself not realizing the temperature of the water was hot.

This may be internal, such as repeated hand movements, facial expressions or body movements, or it may be external such as, needing a very strict routine. One father found his son was most distressed if breakfast didn't happen before dressing. Another mom found that her daughter screamed if she was hugged before brushing her teeth instead of after.

Many kids have favorite baby dolls or toy cars, but autistic children may require those things with them to function and interact with them instead of people. Rather than pretend play of driving or caring for the doll, the autistic child may learn facts about cars, or simply want a certain texture associated with the doll's clothing.

Kids with autism may not initiate conversations or maintain eye contact while interacting. In fact, for some kids, forcing eye contact actually makes it harder for them to understand or process what you are saying. They may also use gestures instead of speaking, misuse pronouns, and often will not follow your gaze if you look or point at something else.

Autistic kids may have unusual hobbies or interests, and know all the facts or every detail about that specialized interest. One 8 year old was diagnosed "nonverbal" because he would not speak, and yet could read and write Klingon. A little 4 year old knew every detail of every kind of train and entire histories of many specific trains.

Children with autism may often get stuck on a single topic or task. They repeat a single word or phrase over and over (and over), or they may ask the same questions repeatedly. They may share the same fascination-fact with you again and again. With similar impairments in task shifting, a child with autism may repeat the same gesture or movement repeatedly, struggle with transition between tasks, or be highly distressed with changes in routine.

There are several rules of thumb for developmental milestones. Babies should be babbling and gesturing by 12 months, and be able to say single words by 16 months. By 24 months, a toddler should be able to initiate two word phrases without prompting. It's always a red flag when a child suddenly loses skills - whether language, communication, social, or motor skills.

The more we learn about autism, the more we are able to treat it. One of the key aspects of treatment is early detection with intensive intervention. Treatment usually includes developing a structured schedule of specific activities at school and home, often using visual cues to prompt the child to transition to the next activity. Treatment needs to be specific to the individual child, addressing their unique symptoms and building on their special strengths. 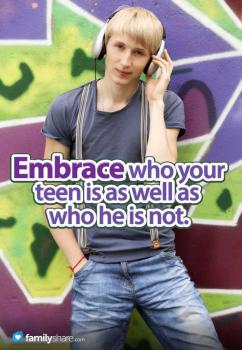 How to Stay Involved in Your Teenager's Life