Making a New Life is Hard. It's No Wonder That Some Pregnant Women Can Feel a Little Sensitive About Their Bodies.

The announcement of a new baby is usually reciprocated with congratulations and pats on the back. Few things are more delightful than the idea of bringing home a little bundle of joy. But the time between the announcement and the delivery can be fraught with misunderstanding and verbal faux pas. Even if you mean well when talking to a pregnant woman, here are ten things you should always avoid.

"Are you still pregnant?"

This isn't exactly something that women can control. One woman's response to this was, "Oh no, I'm just carrying this one for someone else." Trust me, the expectant mother is the FIRST one that wants that baby out and in her arms.

Really? Thanks for the tip.

A woman's belly is not your personal Buddha; it will not bring you good luck. In fact it just might get you a roundhouse kick to the head, as angry mommas can be very agile when they need to be. In fact, the same rules apply for pregnant and non-pregnant women: If you don't know them, don't touch them.

Aren't you due for a CAT scan? Use caution when anticipating due dates based upon size. A woman can have one of two reactions: crying in her car or slitting your tires.

"You look so tired."

You might as well tell her that her ankles are swelling and that she'll never, ever fit into her high school prom dress again. This is insinuating that the mom-to-be just isn't holding up too well. If she wasn't feeling tired before, she'll certainly feel it the morning after she's finished pummeling you.

"Aren't you a little old to be pregnant?"

We all know how the birds and the bees work. Don't act surprised that the machinery is still functioning. If the woman is pregnant then obviously, she's not too old.

7. "I just thought you were just gaining weight."

Well, she IS gaining weight. On the upside, she will lose much of that weight after the baby is born. On the downside, she won't easily forget - or forgive - your remark.

"Don't be so emotional."

Don't be so insensitive. Telling an emotional person that they are being emotional is like using gasoline to put out a fire. Kids, don't try it at home. Remember, it takes a lot of hormones to make a baby, and those hormones have a tendency to do unexpected things to a woman's emotional state. Mention those emotions at your own peril.

"How many do you have in there?"

A newborn may look tiny, but it takes up a lot of womb(C'mon ... don't tell me you didn't see that coming). Trust me, a seven pound baby is cute and small, but a seven pound fetus feels like a ton of bricks.

Translation: you look like a bloated tick. Comparing a woman to a disease-carrying insect, even indirectly, can ruin a person's day.

If you're not completely sure on the correct protocol, then the best course of action is to just let a pregnant woman know she's beautiful and that you are proud of what she's doing. And don't be offended - or surprised - if the hormones stir up a few personality ticks. Soon she'll be right as rain and will have an amazing new life to show for it: the one in her arms ... and the new one ahead of her. 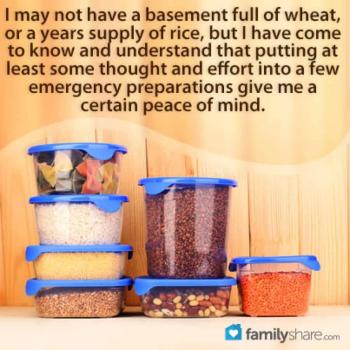 Being Prepared For Disaster