Social media has a place. Ten tips on how you can use social media as a positive force in your family.

When man's best friend goes missing, it can make you go into a panic. Thinking of your cuddly pet wandering lost, hungry, and alone is a scary thought, and one that Georgia resident Dave Vitali had to face for three months.

After he and his dog Max got in a bad car accident on a road trip, his dog went missing in Indiana, and the story was published on the Internet. Months went by without any news on Max's whereabouts.

Later, one Indiana resident adopted a golden retriever from a local shelter and posted an image of him on Facebook. A few Facebook users recognized the dog and commented that he looked like the pup from the car accident. Max had wandered 50 miles from the accident before getting picked up and housed in the shelter. One phone call later, Max was reunited with Vitali at their home in Georgia.

The owner called this a dream come true to the local news station WBST, and said his daughter would be the happiest girl on Earth.

These types of stories are surfacing more with the rising popularity of social media. Recently, a lonely 12-year-old boy feeling suicidal received more than 2,000 letters from strangers on Facebook. The letters inspired him to press forward.

It can be infuriating when your kids use social media 10 hours a day and refuse to look up from their phones. It might drive you crazy when they obsess with a status, pictures, likes, shares or Tweets. You might feel like you will never really understand your teen's cell phone or computer addiction.

Though it can overtake your life, a moderate amount of social media can actually be productive. It makes the world a little bit smaller because you can communicate instantly with anyone, making it the best way to keep in touch. When your teen leaves for college and calls you with Skype on the weekends, you will probably feel grateful for modern technology bringing your family together. But right now, with laptops, cell phones and iPads in every room, it might feel like it's tearing your family apart.

The Internet and social media can be a huge distraction from real life, but it can also bring families closer together when used responsibly. Who knows, it might even return your furry best friend someday. 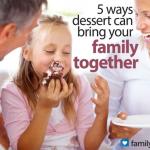 5 Ways Dessert Can Bring Your Family Together