You Don't Have to Break the Bank to Throw a Baby Shower. Here Are 11 Tips to Throw an Expensive-Looking Baby Shower For Less Than $50.

Editor's note: This article was originally published on Anita Fowler's blog, Live Like You Are Rich. It has been modified and republished here with permission.

On Babycenter.com I've recently read a lot of threads and forums of people asking and commenting on a baby shower's cost. Most people were saying that baby showers cost at least $300 and up. Some went so far as to say it costs over $1,000. That's just too expensive if you ask me " so I'd thought I'd share these 11 Ways to throw a baby shower for less than $50.

I have thrown a couple of baby showers for friends and it is super fun. It's a great way to show your love, excitement, and support for the upcoming baby. This week I'm throwing two showers (for the same friend)! One is a shower with a bunch of teenage girls my friend and I work with in our church organization. The other is a neighborhood shower with adults.

All the showers I've thrown have been pretty cute and nice (if I do say so myself). They were expensive-looking but they weren't the celebrity showers you see online with a rented out venue, catered food, and professional entertainment. (If that is what you are after, let me save you some time and let you know that this is not the article for you). What they were (in addition to expensive-looking) is fun, cute, and down to earth. We all had food, drinks, activities, and showered the mama-to-be with lots of gifts, encouragement, and smiles.

1. Give some thought to the theme you will be choosing

Do you have any items that you could utilize so you don't have to buy them all new? Are there themes that tie in with recent or upcoming holidays so that you can get stuff on clearance or on sale? I chose the Peter Rabbit theme for one of the showers I'm throwing because I already had three baby books, three rabbits, and a table cloth that would work. Easter decorations were out as well so I was able to find a lot of things that correlated with my theme.

2. Set a time of day that doesn't require an entire meal to be served

Having a snack bar, dessert bar, etc. will cost much less than a full meal. Skip the caterers and set the food out/make it yourself. At the Peter Rabbit shower I served carrot cake cupcakes, cotton candy, carrots, and off to the side I had drinks, frosting for the cupcakes, and a veggie tray. By not serving an entire meal you will save considerably.

Someone could bring drinks, another could help with some of the food, another could be in charge of the activities, and another a few decorations. This will help a lot on time spent preparing and expense. I have done a shower single-handedly for under $50. That said, it's so much easier to stay within budget and perhaps get even more refreshments and decor by enlisting the help of others.

At the Peter Rabbit baby shower I asked around to see if anyone had anything. One person had two cute rabbits that worked out wonderfully. At a Little Peanut Elephant Baby Shower, we borrowed glass milk jars and a few other main items to save significantly.

5. Shop first at the dollar store

At the craft store I used the free app on my smartphone called Snip Snap and I was able to use a 50 percent off coupon and save $6 and then a 25 percent off coupon on the entire purchase. I saved over $12 using the app and no coupon clipping was needed!

When I was pregnant I was lucky enough to have three baby showers. My sister-in-law gave me the decorations from the first baby shower. I then gave those decorations to my friend who was throwing me a third baby shower which helped her with the expense. If you have a Cricket or a vinyl cutter you can customize things for that shower and reuse them by peeling the vinyl off for another shower.

There really is no need to rent out a venue like some people do.

You can make tissue balls that hang from the ceiling for much less than you could buy them for, as well as banners, little favors, etc. If you can make the decorations yourself you will save. You can buy dollar store table cloths and use them as back drops or just as table cloths and use wrapping paper as a runner " the possibilities are endless. Browse Pinterest for ideas. It is amazing what you can find on Pinterest! Especially when you know what you are looking for. Keep your eyes peeled for ideas that can be done inexpensively and recreate them or use them as inspiration for another creative idea.

10. Choose inexpensive activities to do

There are a lot of inexpensive activities you can do.

11. Skip mailing out the invites and use a free or inexpensive email to invite company

If you are the recipient of a baby shower, it is very polite to send a thank you card or perhaps give a little gift in return. I gave either a scarf or an umbrella with little cotton gloves to the women who threw me a shower. I enjoyed giving back and telling them how much I appreciated them throwing me a shower.

I added a cute saying to the umbrellas I gave to the ladies about how I hope this umbrella will protect them from having to throw future showers. They loved it. 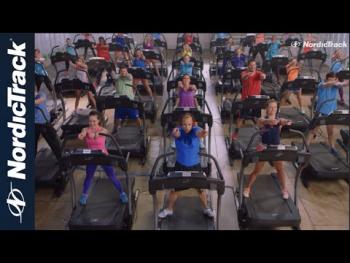 Giant Treadmill Dance Will Make You Want to…