Having a young adult at home is a transitioning period for both the parents and children. Here are fifteen tips to help.

Young adults are no longer children, but adults that still live at home. Whether they're going to college full-time or working, young adults need to feel like they can assert their own independence. But they still need to maintain responsibility and accountability, when it comes to being a part of the family. A recent study shows that 53 percent of young adults age 18-24 still live at home, from the site Empowering Parents.

Here are 15 tips to help parents with this transitioning time in a young adult's life.

He's no longer a kid and is doing more important things such as going to college and working. He's not an adult and shouldn't be treated like one. He needs to feel like he can act his age and still have his independence.

Let her have her own rules

As a parent, this was the toughest thing for me to accept with my own 19-year-old daughter. If your son or daughter lives at home, let him set his own rules. This doesn't mean she can decide to just not do anything. It does mean giving her a chance to exert her independence by acting like the adult she is by controlling chores, curfew, and homework herself.

Keep him involved in the family

Young adults live their own lives, but because they still live at home, it's a wise idea to still include them in family events. He may have other plans, but it shows him that he's still part of the family.

If she lives at home, she's still part of your family, which means she has a room, uses the bathroom, eats in the kitchen and watches TV. Because of this, she should still be given chores. Sitting down and talking to her about her school or work schedule is a good idea, so you both know what she can realistically accomplish without overburdening her.

It doesn't matter why he's home, but praising him for a good work ethic or when he makes good choices is vital to his growth. Encouraging his progression into adulthood is a great way to instill self-confidence and self-esteem for when he does venture out on his own.

You are still the parent. If you don't want a bunch of college kids over until one or two in the morning, let her know. If she's at home, ensure that she has a job or is attending college and not just free-loading.

Don't allow him to be lazy

It is very tempting for a young adult to just not do anything - to just live it up on their parent's dime. However, you need to set the expectation right from the start that he will not be doing that in your home.

One day, she will be gone, but trying to keep her home because you want to control the apron strings can be detrimental to her growth. Your job, as a parent, is to raise her right and then let her fly off to create a new life - away from home.

Let him buy his own clothes and supplies

If he has a job, there's no reason why he can't buy his own things. If he was living on his own, he would have to purchase clothing, food, school supplies and other necessities. So, let him be responsible for them.

This is a touchy subject. On one hand, you want her to be on her own, living her own life. On the other hand, it's nice to have her home too. If a situation arises, such as she's not going to school, then this might be a perfect time for you to give her an ultimatum, according to Livestrong.com. Go to school and live at home free, or pay rent. If she isn't doing either, it might be time for her to move out.

Give him a deadline

If he has no desire to move out, it might be a good idea to set a deadline. After all, the goal is to help him be independent. Have him set a time when he is able to support himself, and when that time comes, stick to it.

If she is using the family car, set time limits on when and for what reason she can use the car. If she has a job, ensure she helps pay the gas and maintenance on the vehicle.

If your young adult is over 21 and still living at home, you may be ready to tear your hair out. Be patient. If you allow him to transition from being a kid to an adult at his own pace, he will be more ready to tackle the real world. Just don't let him stay for a long period of time.

If she hasn't moved out, maybe she just needs a friendly nudge. Talk to her about her fears and help alleviate some of them. Assure her that taking this step is the best thing for her.

If he's still living with you when he's 25, then maybe you, as the parent, should cut the strings and let him fly. If he is allowed to stay under your wing, he may never want to leave the nest. A gentle nudge from the tree may be the only way to get him out on his own. 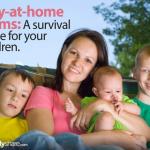 Stay-At-Home Moms: a Survival Guide For Your Children