16 and Pregnant: the Difficult Choices When a Child is Having a Child

Teenagers Live in the Moment and Rarely Think About the Future Consequences of Their Actions. When a Young Girl Becomes Pregnant, She Faces the Most Difficult Decision of Her Life.

Teenagers live in the moment and rarely think about the future consequences of their actions. When a young girl becomes pregnant, she faces the most difficult decision of her life. Each of the choices she may make comes with its own unique risks and heartache.

. When a teenager becomes pregnant, she may feel embarrassed, confused and frightened. Many teens feel like an abortion is the easiest way to make the problem disappear.

. Although abortion is a relatively low-risk procedure, it is still a surgical procedure nonetheless. All surgical procedures carry some risk. Afterabortion.org says the most common complications are infection, excessive bleeding, perforation of the uterus, cervical lacerations, anesthesia complications, convulsions and endotoxic shock.

. Afterabortion.org reports that a study of post-abortion women just eight weeks after the procedure showed that 44 percent complained of nervous disorders, 36 percent had sleep disturbances, 31 percent had regrets about their decision, and 11 percent had been prescribed psychotropic medication by their family doctor. Teenagers were at especially high risk.

Women were at greater risk of experiencing a negative reaction to abortion if they felt pressured to have the abortion or keep it secret, lacked support or felt stigmatized, felt ambivalent about the procedure or had low self-esteem prior to the abortion.

When a friend of mine in college became pregnant, she felt pressured by her boyfriend to get an abortion. He felt that her pregnancy would create problems with his career. Two days each year would unfailingly cause her to feel sad and depressed - the anniversary of her abortion, and the anniversary of her original due date.

. Time.com explored some of the reasons teens decided to keep their babies. Some of the teens interviewed said that they wanted a baby who would always love them. Some said they felt that if they were woman enough to get pregnant, they should be woman enough to be a mom. One teenager felt that having a baby was like a trend or an accessory: other girls see a girl with a baby and think, "Oh, it's so cute! I want one." They fail to take into account the difficulties of raising a child and the missed opportunities that they would have to sacrifice for their baby.

. WebMd.com says that teens are less likely to seek out and receive adequate prenatal care, especially if they don't have support from their parents. They also have a higher risk of developing pregnancy-related high blood pressure. Teenagers are more likely to have low-birth-weight babies and premature births.

. WebMd.com also says that teens are at a higher risk for postpartum depression, especially if they do not have social support. They may feel alone or isolated and ill-equipped to meet the demands of a newborn. Later, they may mourn the loss of normal teenage experiences, college and career opportunities.

I had a good friend in high school who became pregnant. She decided to keep her baby. Although she was a loving mother and had good support from her family, she chose to drop out of high school and take care of the baby. It wasn't until much later in life that she was able to go back to college and become a teacher.

. Teens who choose adoption have the same health risks as those who choose to keep their baby.

. After bonding with their baby during pregnancy, many teens feel anxious about turning their babies over to strangers. Teens who put their babies up for adoption go through a grieving process. Livestrong.com points out that many have unrealistic expectations that they will be able to go back to normal after the adoption. They are unprepared for the long-term pain that they may experience as they worry and miss their child. Open adoptions, where the birth parents continue to have contact with their child and have some visitation rights, can help minimize these feelings.

Another good friend of mine struggled with infertility. I watched as years passed and she and her husband were unable to have a child of their own. They decided to adopt. After a long, expensive and grueling journey, they were finally able to welcome a daughter into their home. They chose an open adoption. As my friend shared pictures of the event, I saw the joy on her and her husband's faces, but I was struck by the pain evident in the faces of the birth parents.

There are no easy answers when a teenager becomes pregnant. Each choice comes with its own kind of heartache. However, teens with a strong and loving support system have a better chance to get through this difficult time and heal. 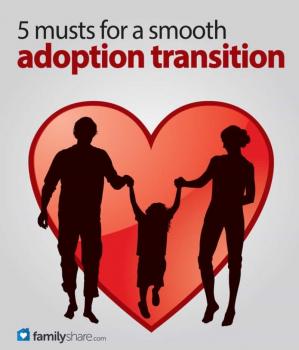 5 Musts For a Smooth Adoption Transition