2 life-changing pieces of advice from a billionaire father

On His Deathbed, This Billionaire Dad Gave His Son Advice You Need to Hear.

If you've ever found yourself trying to figure out what to say to a loved one near the end of his or her life, you know how challenging and uncomfortable it can be.

I found myself in that situation during the final days of my dad's life. He was an extraordinarily successful entrepreneur, but the long hours he'd spent working and the fact that he'd neglected his health had finally caught up to him.

Sitting by his hospital bedside, I wasn't sure what to say. I wanted to connect on a deep level. Speaking from my heart, I said, "Dad, it's been a privilege to have been your son, and I want you to know that I will spend the rest of my life practicing lessons I've learned from you and also teaching those lessons to others."

1. Measure yourself against yourself, not against others

My dad lay on the bed, head on his pillow, eyes closed. He didn't say anything, but I sensed he could hear me. "But," I continued, "I know as I do that I will spend the rest of my life comparing myself to you."

2. Make service an important part of your life

While speaking with many people who knew my dad, I learned of hundreds of acts of service he performed for them. Some of these were small like buying a refrigerator for someone or paying for a car repair or covering a medical bill. Others were large like paying off a mortgage or giving or lending money to people to save them from bankruptcy. His generosity extended beyond money, though. He also gave of himself, freely sharing his time and advice and frequently performing personal acts of service to others.

I wondered, "When did he have time for all that? Was it between negotiating NBA players' salaries or building new automobile dealerships?" My dad never told me of these acts of service - I figure he was either too busy performing them or too humble to share.

Bryan and his wife Dawn are professional life coaches. Bryan holds bachelor’s degrees in both English and Asian Studies. Bryan has dedicated his life to helping achievers and seekers lead meaningful and enjoyable lives. Learn more at his website.
nextarticle 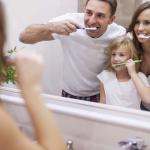 6 Ways to Get Kids Excited About Brushing…