To Be a Forgiving Person May Not Be Easy, But It is Essential For a Happy Life. Discover Some of the Roadblocks on This Journey to Forgiveness and How to Overcome Them.

We hear a lot about the need to forgive those who have offended us, but it's not an easy thing to do. When we have been deeply hurt by someone our nature is to hold a grudge or try to get even. These methods never heal a broken or injured heart.

Here are three reasons why it's so hard to let go of these feelings and why we must if we want to find peace:

1. We think the offending person needs to be punished

For some reason we think that by remaining offended and unforgiving we are punishing the person who offended us. Is it that because we don't trust that God is capable of punishing those who need punishing, so we must give him a hand?

This thinking works against us, not against the offender. Most often the offender doesn't even know you are harboring the grudge or know why. If that's the case, how would the offender ever believe your unforgiving attitude is punishing him or her?

Whatever the situation, the ones bearing the grudge are the ones who carry the weight, not the offenders. It may not even cross their minds, and yet it lay like a jagged stone in the heart of the unforgiving ones who wish only for revenge. That's a terrible place go be, so give up trying to be the punisher and be the forgiver. It's far healthier for your heart, in more ways than one.

2. It's difficult to ask for forgiveness

So many families suffer needlessly from past offenses-some so simple that they can barely be remembered. All they know is they are still mad at so and so for doing whatever it was that offended them. Oh, what joyous mending of hearts could take place if one or the other would simply take that leap of faith and apologize. Even if you don't think it was your fault, apologize anyway for any part you may have played in the conflict.

Unforgiveness happens in marriages all too often. A spouse says or does something that offends and the other marinates in the hurt until it becomes bigger than it ever was.

A woman told of her being offended by her husband and the anger against him kept building. She realized this was ruining their marriage so she went to him and apologized for carrying the grudge and asked for his forgiveness. He broke down in tears and apologized to her for what he had done. She said, "In that moment our marriage was healed." She said they have been happy since that day.

3. Anger causes a loss of self-control

When we allow anger to take over our lives we lose control. Our actions are all too often focused on the person we are angry at instead of what we need to do about it. Our vision is dimmed by the hatred it stirs inside of us. At that point forgiveness is the last thing on our minds.

Guy Finley, director of the Life of Learning Foundation, said, "To be angry and hateful is to suffer. It doesn't help anyone to get angry. Anger hurts whoever is angry. It burns. Anger ruins relationships, causes heartache and regret and devastates health. And yet, in spite of all of these facts, when we are angry it feels right. Somehow, in some unseen way, anger proves to whoever is experiencing its heated feelings that he or she is right even though, in the eyes of reality, nothing could be further from the truth."

It is only when we can rationally look at a situation and decide within ourselves what we can do to bring forgiveness and cause change to happen. Waiting for the other person to initiate the action is like waiting for a ship that is lost at sea. You need to be the one to take control of yourself and the situation and frankly, forgive the other person.

That may be easier said than done. The one thing that will help that happens more than anything is to humble yourself enough to pray and ask God to help you. He can give you courage and wisdom in handling the matter in the best way possible.

Even if your efforts are rebuffed, be determined to stick to your resolve to forgive. You cannot control what that other person does regarding your apology, but you can stay true to your determination to forgive. Pray to keep God's peace with you. It will make a huge difference in your ability to cease being angry and truly forgive.

Poet Maya Angelou reminds us that "It's one of the greatest gifts you can give yourself, to forgive. Forgive everybody."

If you do this, your health will improve, your burdens will feel lighter and your relationships will be enriched. All of this will bring greater peace and happiness into your life. 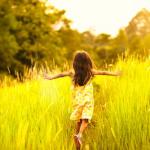 Why Kids and Parents Really Do Need 'me'…