Sometimes, Even When You Have a Great Line of Communication With Your Kids, They'll Choose to Keep Secrets From You.

A couple years ago, we started noticing our oldest son, Cooper, was becoming withdrawn. He was in second grade at the time and his normally happy-go-lucky personality was replaced with an irritable and emotional child we hardly recognized. We would continually ask him, "What's wrong, buddy?" His answer was always, "Nothing." We didn't know if he was keeping secrets, if he was unable to communicate what he was really feeling or if "nothing" really was wrong and he was just experiencing normal ups and downs of growing up.

As we continued to probe, talk to his teacher and try to put together the puzzle, we learned that he was feeling bullied by a boy on the playground and the bullying was creating a sense of isolation and abandonment as some of his closest friends refused to stand by his side on the playground as he was being singled out. He was carrying this crushing feeling of fear and frustration, but his young mind couldn't process all he was feeling, so he chose to stay silent. He was just hoping the problem would go away on its own.

We dealt with the problem as best we could through encouragement and communication with him, and letting the school know what was happening. We also encouraged him to talk to his "friends" who had not been acting like friends on the playground. It became a time of growth and character-building for him and it also taught us an important parenting lesson... Sometimes, even when you have a great line of communication with your kids, they'll choose to keep secrets from you.

Every child is different and every season of childhood and adolescence poses unique challenges, so I hesitate to create a list which generalizes the complexities of ever person into a single, short list, but I do believe this list is helpful. After doing some research (from people a lot smarter than me) and talking to other parents and kids, I believe the list below represents some of the most common "secrets" kids choose to keep from their parents.

The purpose of me sharing this information is to create deeper understanding and communication between parents and kids and to help parents become more vigilant about the issues your kids might be facing.

All kids will struggle with confessing "secrets" that might get them in trouble, but these issues below go to much deeper issues than simply avoiding punishment. These are ongoing struggles that could have longterm consequences in your child if he/she doesn't discuss them. The secrets your kids are most likely to struggle sharing include (in no particular order)...

EVERY human being at some point in his or her life will feel this sting of rejection. In childhood and adolescence, this sting hurts the most. When we feel like our friends don't like us, the opposite sex doesn't notice us, the sports teams don't want us or our best efforts to achieve success aren't cutting it, our kids don't know what to do with that emotion and they rarely express it to parents.

To help them open up about this,

show unconditional love, encouragement and also share stories from your own past where you felt you didn't measure up. Our kids gain strength from knowing we've been where they are and we got through it!

There's a deep-seated fear in the heart of most children that, even if they feel loved, that love could be taken away if people knew about certain thoughts they think or certain things they done. They believe the lie that, "If they really knew me and knew what I've done and who I really am, NOBODY would love me." For kids (or adults) who believe this lie, they feel forced to live a lie and appear to be perfect or they may lose everything.

To help them open up about this,

remind them that we ALL have blown it and need God's grace. Remind them of your unconditional love and God's unconditional love for them. Share mistakes (even the big ones) from your own past. Don't worry about losing your kid's respect by telling them where you've blown it. Kids aren't looking for perfect parents, but they desperately need authentic and transparent parents.

Just like with our son, this "secret" is prevalent and very damaging for the children who carry it. If you notice your child's behavior changing, don't assume it will go away on it's own or that "nothing" is wrong. Keep probing. Keep trying to communicate. Keep investigating. Keep reminding your child of your love, your acceptance, your availability and your unending concern for their well-being. When it comes to parenting, remember that it's about our availability much more than it's about our ability. Let's be there for our kids and help them share the secrets that might be holding them down! 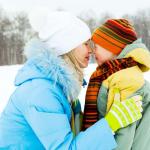 How My Son's Lost Coat Made Me a…