3 Things to Avoid During Conflict With Your Teen

You Might Not Realize It, But When Arguments or Conflicts With Your Teens Erupt You Could Actually Be Making Them Worse. Here Are Three Things You Should Try to Avoid During a Conflict With Your Teen: Engaging in the Argument. as a Parent, You Can Ch

You might not realize it, but when arguments or conflicts with your teens erupt you could actually be making them worse. Here are three things you should try to avoid during a conflict with your teen:

Engaging in the argument

As a parent, you can choose whether or not to start an argument with your child. Yes, initially it will feel like your child is engaging you first by having a comeback or some outburst, the truth is that if you don't respond, the argument won't continue. You can choose not to let your child's angry outburst draw you into a heated argument you don't want. By example, you can show your child that conflicts are not resolved through angry arguments. Encourage your child to calm down and allow for the opportunity to discuss the conflict in a productive way. By engaging in active conversation you can encourage your child to come up with solutions or options to consider verses simply arguing about why they don't want to do something or how they think something is unfair. Calm conversations are much more productive than angry arguments.

Yelling or acting out in anger

Whether your child escalates the situation or not, there is never reason to act our or yell at your child in anger. If you feel that anger is taking control you should simply find a way to remove yourself from the argument until both you and your child have time to calm down. When arguments escalate, they often result in personal attacks and insults being thrown back and forth. These negative attacks can cause emotional damage that will linger long after the argument ends.

While you may feel the need to emphasize a point or remind your child of the rule they are breaking; in the heat of the moment these important parts of the conversation will be overlooked and only the criticism remains. Instead, find a more appropriate time when all parties are calm to discuss the concerns as well as how they were handled. Conflicts are handled much better during a constructive conversation where both parties are willing to identify the problem and work together to find a better solution.

Conflicts between parents and teens are a normal part of the growing up process, what doesn't have to be part of this conflict is the arguments that often result. Instead, begin early by establishing open communication and trust with your child. Consider areas of potential conflict before they happen and, with your teen, create a plan as to how each will be handled. Then, if conflict or arguments begin, as a parent you can simply choose not to engage in them. Instead of arguing back with your child simply let their outburst past and calmly remind them of the rule. If your child wants to continue to argue, simply suggest a calming down period for you both and then re-convene to discuss the matter to come up with solutions and options together. If you can control the situation you'll find that as conflicts happen, anger does not have to become a prevalent part of it. 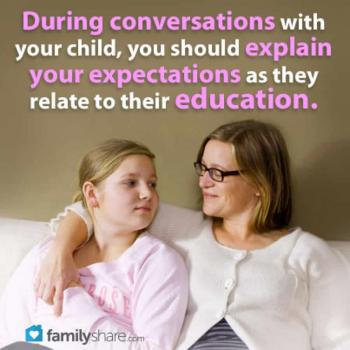 3 Ways to Help Your Truant Child