3 Ways to Get Results With Your Kids Without the Frustration

You've Tried Everything to Get Your Kids to Do What You've Asked of Them But to No Avail. Even the Usual "If You Don't..." Gets You Nothing But Blank Stares and Raised Voices. Here Are three Ways to Get Results Without Getting Frustrated.

Sitting across from me in the coffee shop one Wednesday afternoon was a mom with her two young kids. Trying not to be the creepy stranger behind the laptop, I couldn't help but overhear part of their conversation as the mom's voice got louder and louder. The kids seemed to have just gotten out of school, and the family dropped in for their weekly treat. Having just been released from a day of captivity, the youngsters' behavior was a little on the active side but nowhere near disruptive. They certainly wouldn't have warranted a judgment and label of "those kids."

The mom, on the other hand, seemed to disagree with my non-verbal assessment. She sternly looked at her two offspring, shook the parental finger at each of them and said in her best disgusted mom voice, "If the two of you don't start behaving right now, we will NOT be coming back here next Friday!!" The youngsters with their confused puppy looks on their faces seemed to almost say to each other, "Huh? What is this 'behaving' and 'next Friday' of which she speaks?" I imagined them shaking their heads in an attempt to make sense of it all and watched as they went right back to what they were doing.

I, too, was taken aback for a moment. I thought about all the times I had threatened my kids with a similar punishment that really had no impact on them whatsoever. What I hadn't realized until then was that my kids weren't deliberately defying me - they just truly had no idea what I was talking about. I had never taken the time to explain to them what my expectations of them were, nor had I understood that the concept of time as measured in days or weeks was as foreign to them as a rotary dial telephone.

So how, then, do we, as parents, communicate with our kids in order to get them to act like angels in the coffee shop, pick up their dirty underwear off the bathroom floor and stop throwing tantrums in highly populated places? These simple nuggets of wisdom can work wonders in your family when practiced on a regular basis.

Remember the movie "Big" in which Tom Hanks plays the adult-turned-kid and ends up as the product development specialist for a toy company? It was through the eyes of a child that the storeowners were able to reinvent their business, create toys that kids would actually use and restore their own personal childlike imaginations.

You can do the same thing by taking a few minutes out of your overloaded schedule to squeeze your foot into your kids' shoes. All behavior is a sign of an unmet need, so try seeing life from their perspective and talk to your young'uns in a way that will help them understand yours. If, for instance, the kids just got out of school and need to release their pent-up energy, get their weekly coffee shop treat "to go" and take them to the park to run around for a while. They get exercise, you get relief from having to "control" their behavior and you all get some much needed fresh, mind-clearing air. It's a win-win for everyone.

2. Compromise - without an ultimatum

If your son's boxers have been living on the floor for the last week and he's promised to put them in the hamper for days now, find out what he's thinking and together come up with a solution. It could just be that he gets in such a hurry that he forgets to walk his dirty clothes to the basket at the end of the hall. If your goal is to have his underwear in a centralized location other than the floor, try putting a cool sports clothes basket in the bathroom for him. It's another slam-dunk win for both of you.

We all want our kids to understand the consequences of their actions. The best way for them to learn is from your example. Actions truly do speak louder than words, but when you put both actions and words together you have a powerhouse of a teaching moment.

Just like when our kids get distracted and forget their manners, so do we as adults slip into unconsciousness from time to time. Voices are raised. Doors are slammed. Tantrums are thrown in public. Once you've had your little "moment," however, fess up. Explain to your kids why you were so frustrated and the emotions that came up when nothing was going your way. And then say it. Tell your kids you're sorry you reacted the way you did. That, in itself, is one of life's greatest life lessons. They may not get it the first time, but when they see you continually own your actions, they'll start becoming aware of theirs and make changes without you having to nag them all the time.

While these three steps might seem elementary upon first read, putting them into practice is a whole other story. As the saying goes, however, "practice makes permanent." Pick one nugget a day - or even one per week - and work it 'til it works. The results will amaze you, and you can be sure these are actions that will have you saying "thank you" more often than not. 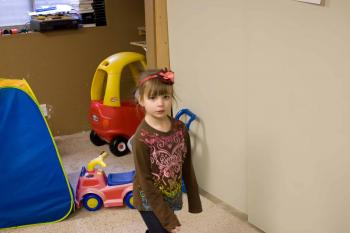 How to Celebrate World Humanitarian Day