3 ways to keep your cool with your ADHD child

Raising children that have an Attention Deficit disorder is difficult. Certain actions or behaviors might cause you to lose patience with your child. Here are three ways to help you keep your wits when dealing with your child's behavior.

One morning I discovered that my 9-year-old daughter had fashioned a colorful array of stickers on the bathroom wall. While these stickers were indeed cute and decorative, they didn't really go with the overall color scheme of the bathroom. Therefore, my daughter's exhibit would have to be removed. When I asked her why she chose the bathroom wall as the canvas for her artistic outlet, she uttered those three words that make parents go gray overnight, "I don't know."

I already knew what her response would be even before I asked. She simply acted on an impulse and genuinely did not know why she did what she did. She was diagnosed with ADHD at age 3. This added a whole new dynamic to our child rearing experience. Impulsive behavior is a common characteristic of people with ADHD. With children, it's even more challenging because they haven't developed the level of discretion that comes with age and maturity. There are things going on in their heads that they just don't understand so they act according to their thought process. While I still occasionally get impatient with many of my daughter's behaviors, I have been able to better control my temper by looking at the situation with a different perspective. Here are three ways that have strengthened my ability to keep my patience (and nerves) intact.

Base your expectations on the attention deficit-influenced behavior

Expect that you will remind your child of something she needs to do at least 100 times (sometimes more) before she gets the message and follows through with the task. Children with ADHD have difficulty retrieving and processing instructions. They also struggle with getting started and staying focused on a particular task that might take a while to complete.

With an ADHD child, expect that he or she will often behave or react in a way that is contrary to the behavior you would like to see. When you set your expectations based on your knowledge of how ADHD children operate, it will be much easier to work through challenging issues with your child.

While this is necessary with any child, you really need to be selective in choosing what you will focus on with your ADHD child. For example, children with ADHD commonly have messy rooms. Staying organized or cleaning up a cluttered room is often too overwhelming and they simply cannot bring themselves to carry out the task. They simply struggle with performing many of the common executive functions. According to Dr. Thomas E. Brown, "A New Understanding of Attention Deficit Disorder (ADHD/ADD)," a person's inability to carry out certain tasks is often considered a lack of willpower. However, children and adolescents with ADHD have inherent problems in the chemistry of their brain's management system. This inhibits their ability to perform tasks that could take longer than 30 minutes.

There is really no point in losing patience from continually reminding your ADHD child to do simple tasks such as pick up her toys, put her laundry away or turn off the light when she leaves a room. It's likely that she will develop these executive functions later in life. It is actually better to focus on developing more life-enriching abilities such as social skills and academics. With ADHD children, it's easier to overlook some behaviors such as not making their bed every day or leaving shoes in the middle of the floor when you know that much of their efforts are devoted to developing skills and values and learning to be productive members of society.

Strive to recognize the progress they do make

ADHD is a delayed learning disorder. Children with this disorder struggle to learn and comprehend new information. Nevertheless, while their ability to learn might be slow compared to other children who don't have the disorder, they are still learning and developing all the time. You might not immediately recognize their progress because you are with them every day. Still, they are growing and maturing and will eventually have the ability to better monitor and control their impulsive behaviors.

Attention Deficit Disorder induces unpredictable behaviors in those who struggle with the syndrome. There is no guarantee that you won't have a few bouts of banging your head against a wall when dealing with your children who have ADHD. However, when you educate yourself about the disorder and set your expectations based on your child's known abilities and limitations, you will be able to put more energy toward helping your child develop valuable life skills. 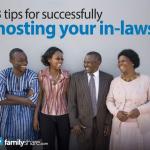 3 Tips For Successfully Hosting Your In-Laws