3 Ways to Teach by Example

Being a Parent Can Be Daunting. Before You Stands a Child You Are Expected to Mold into a Good Citizen. and if That's Not Enough Pressure, You're Raising Them in a World That Has Turned Good into Bad and Bad into Good.

Being a parent can be daunting. Before you stands a child you are expected to mold into a good citizen. One who will carry your legacy forward and use your example as guidance to raise their own children. And if that's not enough pressure, you're raising them in a world that has turned good into bad and bad into good. The good news? You are not alone. There are many great examples to follow from within your life, family, circle of friends and community.

A few years ago, we visited our good friends. They have four children, three boys and a girl. At present, the parents are working in their business with his brothers. He told us the following story.

"The other day I told Mike and Jim we were going out to mow the lawn."

"But Dad, can't Jose do the lawn? Isn't that what you pay him for?" Mike whined, and Jim agreed.

"I want you to learn how to mow the lawn just as I learned," our friend responded. "We weren't always rich, and there may come a time you need to know these things too. I want you to respect Jose for all he does."

When I was growing up, I often heard, "do as I say and not as I do." This attitude, often a response to being caught giving the wrong example, may lead to embarrassment when children say or do the very things we ask them not to. Set the example by saying and doing those things you want your children teaching your grandchildren.

I once retaliated in anger on a particularly contentious day and told one of our children they couldn't eat dinner with the family since they couldn't get along. I didn't feel good about the decision, but I had made it. I continued to regret the harsh punishment and went to the child and apologized for lashing out in anger with an unjust punishment. We cried, hugged and family dinner never felt as complete as it did that night.

Don't be afraid to apologize. Let your children know you are willing to do the very things you ask them to do. Tell them you're sorry when you make a mistake, yell out of place or make an unreasonable demand. Your example will not go unnoticed.

Parents should not multitask while listening to their children. No checking Facebook, email, preparing dinner or doing the dishes. The tasks appear more important to you than the child and may lead the child to seek approval and acceptance from the wrong sources.

In the article, Communication Counts: Teenagers Talk about Their Parents,by Janice Smith, Assistant Editor, "a 16-year-old from Spain said, "it would be better if they would listen to me a little to see how I feel about something. After they have explained the problem to me, I would like them to counsel me and tell me what they would do in my place."

Another child, in the same article said, ""They let me make my own decisions. They give counsel and their opinions, but they try not to force me to do anything. They ask for my opinions and respect them."

Listen to your child with an open mind. Be considerate of her age and understanding when you explain your point of view. Stay away from the, "I'm right and you're wrong," attitude. Make sure you listen, respect and understand his opinion. Come to an understanding that both can agree on and move forward. This will increase your child's self-esteem and remove the stress of the situation from both you and your child.

My sister, brothers and I wanted a horse. My parents told us we needed to earn the money, and they'd talk about it more when we had enough saved. My sister and I took on a large paper route. My parents advised that at least 50 percent of the income should go into savings to obtain our goal. We lived in Alaska and did the route by foot. Winter months were more difficult than summer, but we wanted horses.

My father worked for the Air Force and was transferred to Loring AFB, Maine. He purchased a home in the country so we could have our horses. The property did not have a barn or corral. My father found an old potato barn a farmer wanted removed. We tore it down and used the wood for the barn and corral. The local potato fields had piles of rocks that had been removed, and we gathered them for the foundation. We built a three stall barn onto the back of the detached two-car garage. My father then found a farmer that had some extra poles and we built the corral. We made an agreement with the same farmer to help during haying. We were paid in bales of hay. I raised and sold meat rabbits, and we picked potatoes for grain. Everything was in place. My horse was a Morab (Morgan/Arabian cross), my sister's was a thoroughbred and my brothers got a pony. We didn't have a trailer, so we rode the horses home with my father walking alongside. The pony came from up the road.

Every one of my siblings has great work habits. My parents taught us this through example. We didn't sit on the sidelines and neither did they. We worked together, so our family had everything it needed and, sometimes, wanted.

Look at your childhood and the examples of your parents, friends and their parents. Follow the positive examples and turn the negative ones around so that you, too, may teach by example. 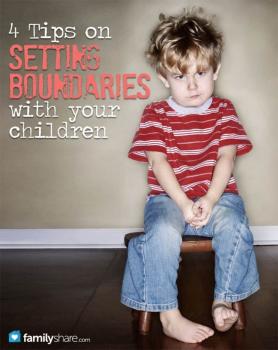 4 Tips on Setting Boundaries With Your Children