3 ways your kid is probably better than you

Discover three main areas your kid is probably better than you, and learn to embrace your inner child. It might just be the change you didn't even know you needed.

As I stood in the check-out line debating whether to tell the lady in front of me that she had a tissue toilet seat cover sticking out of her pants, I heard a little voice loudly say, "Hey, lady, you have something sticking out of your butt." To my embarrassment, that little voice belonged to my three-year-old. The lady slowly reached behind her to feel if she was "the lady." She quietly removed herself from line and retreated to the sanctuary of the bathroom. I didn't even have time to apologize (not that I knew what to say). As I finished paying, she approached us and proceeded to thank my son for being honest and brave enough to tell her. She said she wished someone had sooner. In that moment, it dawned on me that my son is a better person than I am. He did what I should've done but couldn't.

If you are like me, here are three areas your kid is probably better than you, and why you should be more like him.

I couldn't imagine walking up to someone and saying, "Hey, your nose hairs are really long." Something tells me it wouldn't go over well. However, if someone has a ginormous booger hanging on said nose hair, maybe you should be willing to tell him (for his sake!). On a larger scale, you can apply the same amount of bravery into your own life by daring to meet a new friend, starting a new activity you've been too scared to try, helping a stranger, going for that job promotion you've always wanted or asking for that raise you deserve. Out of fear of hurting someone, or more likely, putting ourselves in an awkward position, we choose to hold back. Let go of fear and rediscover your own confidence with the same excitement, gusto and even naivety you did when you were little. Through bravery, you may find yourself in a better position.

One of my favorite things to do when I take my children to the park is to watch and see how quickly one of them makes a new friend. Even more than bravery, this requires a certain amount of acceptance. I have been a personal witness to a child's ability to look beyond gender, social class, race, physical appearance and/or ability, and even language barriers. Personally, when I find myself in new surroundings I immediately look around with the hopes of finding a place for myself among a group I "fit" into. More often than not, I never find that group because it doesn't exist. Looking like someone or acting like someone on the surface means nothing. People are people. Move forward in your interactions with acceptance and a sincere desire to get to know someone. You may find yourself surprised by how many more meaningful relationships you have. After all, who couldn't use a few more friends?

How acceptable would it be for a grown man to run around chasing floating bubbles, giggling as he pops each one? Not very; yet, if you're being honest, you kind of wish it was. Children understand and embrace what makes them happy. It might be said that a child's driving force is happiness. If it makes them happy, they are going to do it. Adulthood brings responsibility that can often overshadow that innate understanding of what really makes us happy. Challenge yourself to do one thing each day that simply makes you happy. It doesn't have to be big or grand. In doing so, those responsibilities will be less daunting and draining. Happiness has the power to renew and recharge. Remember how it felt to be the kid chasing bubbles cross the lawn? Allow those forgotten slivers of happiness to be a part of your adulthood. As an adult you have a lot of "have-to-dos," but that doesn't mean you can't still do the "want-to-dos." It's not selfish to desire happiness. You deserve it now as much as ever.

By rediscovering a child's innate ability to be brave, accepting and happy, we can better ourself, our situation and other people. So, the next time you find yourself seemingly alone in a room full of strangers, find that one person with toilet paper trailing behind him or her, summon your inner child and walk on over to meet your new friend. 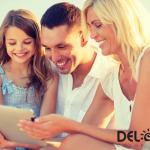 7 Terrible Habits You Are Unknowingly Teaching Your…