4 Keys For Doling Out Discipline Without Disconnecting With Your Teen

There is a Way to Discipline Your Teenage Children and Still Maintain a Close Relationship With Them.

Sometimes teenage children do the dumbest things, and parents just want to wring their necks. When that feeling is in high gear your methods of discipline can easily accelerate into an unpleasant situation. The worse the infraction, the higher your chances of ruining your relationship by your own out-of-control behavior. A child's misbehavior should never dictate a parent's misbehavior toward them. Parents have to remember that their purpose in doling out any discipline - and it must be doled out - is to help their child succeed. So how do parents do it without making matters worse?

4 keys for doling out effective discipline

First, be united as parents

We suggest you have a couple's council where you decide together what your family rules and values are and what to do if these are violated. Then hold a family council where you spell out what the rules are and what will happen if they are broken. Children also need a clear understanding of the reason for the rules. They're not just there to make your children's lives miserable. They have a purpose. Make that purpose clear so they can see why it's important to be obedient. Let them know how these family initiatives are there to help them have a happier, safer, and more productive life. They exist because you love them.

Second, handle the whole process in a spirit of love and respect

If you do this, they will know you mean the "because we love you" part. That means your voice remains calm during discussions with the children regarding the setting of these rules as well as the follow up when one is disobeyed. Yelling at your children just teaches them how to yell, not how to be obedient. It can create a feeling of animosity between parent and child. If your child storms out of the room mumbling, ignore it. That's normal. Don't escalate it with a comment like, "And stop that mumbling."

Third, listen to your children

Allow them to share their feelings and be part of the rule making. When they break a rule, let them explain what happened. Sometimes it may be due to something they could not control. For example, if they are late coming home from an activity because friends insisted on stopping somewhere else first, give them the benefit of the doubt. If they were dependent upon the friends for transportation they may have felt trapped. Hear them out. Talk about what could be done next time. Insist that whenever there is a change of plans they must call you and get your permission or ask you to come and get them. Work with your kids. If coming home too late continues then review the rule and punishment, and be consistent in your follow through.

Fourth, when the rule has been broken do your best to make the punishment match the offense. Let's say your daughter violates the rules you have set up for her phone use. The natural consequence is that you take her phone away for the amount of time agreed upon in the family council meeting held previously. It will not be a surprise to her even though she will try to talk you out of it. When you hold to the agreement she may be mad at you. That doesn't mean you have to respond to her in anger. Keep your cool, and stick to the rule.

A couple told us about their rule regarding their teen's use of the car. He could drive it if he obeyed the rules they had agreed upon. He blatantly broke the rule about sticking with where he said he was going, then sassed his parents when he was found out. His father simply said, "Sorry it happened, son. You know the rule. Give me the keys. As agreed upon, you will not be using the car until you speak to us with respect, and we know we can trust that you'll obey the car rules." He angrily responded with, "Fine! I don't need your stupid car. My friends will take me where I need to go." His dad calmly said, "That's fine if that's what you prefer." The boy stormed out of the room. Both parents proceeded to treat him normally, with kindness and respect while sticking to the rule. That lasted three days. Then the boy came to them and respectfully said, "OK. I can't rely on my friends. Tell me again what I need to do to use the car and I'll do it." The rules were reviewed, he was given a second chance, and he obeyed the rules after that.

If kindness and respect prevail when issuing a consequence then your relationship will not be damaged. It may be a little strained for a while, but not damaged. If you remain consistent and treat your children with love and respect they will know you really do care about them.

As children learn to obey the family rules it will teach them to be respectful and obedient to other rules and laws required for successful living. 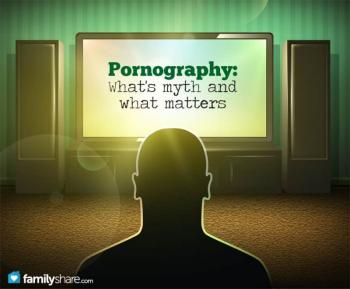 Pornography: What's Myth and What Matters