No Siblings Love Each Other All the Time. Create Individual Benefits For Each of Your Children, and Remember That Letting Them Duke It Out Isn't Always Bad.

When my only daughter arrived on the scene, she was welcomed by one brother and scorned by another. In his little toddler way, the disgruntled brother exhibited signs of jealousy and contempt for his tiny new sister. He didn't want to share me, of course. But the dolls, pink outfits and hair accessories were all overwhelming and foreign to his little boy world, and he probably wondered why he never got all those pretty, pastel-colored objects as a new baby.

From the time they're drinking from Sippy cups, siblings arouse each other's competitive natures. Most siblings don't get along 24/7. Learning to share, cooperate, get along and support one another takes time - sometimes even a lifetime.

There are a few simple methods parents can use to curtail antagonism at home.

Create benefits for each stage of childhood

Age 5 is awesome! But so are ages 6, 7, and 8. Vary, "Your brother gets to stay up late because he's older," with "You get to choose your cookie first because you're younger."

Some oldest children feel that too much is expected of them. Maybe a middle child feels lost in the shuffle. Youngest kids may feel that they don't measure up to their older siblings' talents and accomplishments. All of these emotions can play into rivalry, discontent and feelings of inadequacy within a family.

Help your children feel special as the youngest, middle or eldest by encouraging them to stop comparing themselves and enjoy being unique. Create perks and special benefits for each child, no matter what stage of life he's in.

Resist singling out a child based on gender

I could go shopping every weekend with my only daughter, but that would never fly with my boys. It's not that they want to shop, but they do notice which kid I'm spending money on and who is getting my time and attention.

Singling out kids for special events or activities can also play into gender stereotypes. For example, I've been dying to purchase tickets to a popular play for my daughter and me. However, maybe my boys would enjoy the play, too. By inviting my daughter to the play and nudging my husband to take the boys to a baseball game instead, we're inadvertently teaching our kids that baseball is for boys and theater is for girls. A big mistake.

Of course, every kid has specific tastes and interests. But find out what they like rather than always assuming that your son would enjoy the monster truck rally while your daughter prefers the mall.

Let them work out their minor squabbles

Barring any violent or life-threatening situations, why notÂ allow your children to duke it out? When they come to you with every petty disagreement, your kids aren't learning problem solving strategies. When you instruct them to work things out on their own, they're forced to look for solutions and cooperate. Referee from a distance and don't tolerate hurtful language or physical aggression, but encourage your kids to figure out on their own how to meet in the middle.

Accept that your kids will egg each other on

Some competition within a family isn't such a bad thing.

In the article Sibling rivalry good for children, Dr. Claire Hughes is quoted as saying, "The more the children upset each other, the more they learn about regulating their emotions and how they can affect the emotions of others. The more they point-score, the more it can motivate them to achieve... . parents might take some sort of comfort, when their children are fighting, in the discovery that they are learning valuable social skills and intelligence which they will take outside the home ..."

In the same article, Dr. Tina Kretschmer advises parents against "stifling" their children's rivalry. "It's a natural part of sibling relationships and it has its good sides: it can motivate them to choose different niches in which to excel," she says.

Fortunately, kids from the same families often grow up and decide that they really like one another. Their childhood discord can even create funny, positive memories. Read here for some additional strategies on dealing with sibling rivalry. 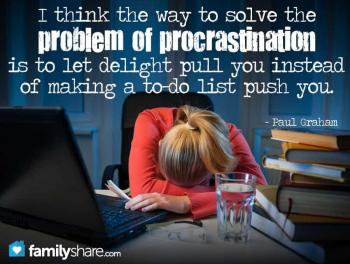 5 Techniques to Lessen Panic Due to Procrastination