5 famous people Pope Francis has met (that we know of)

Vatican Meetings With Pope Francis Can Be Pretty Secret. Here Are Five That We Know of With Celebrities.

On Thursday, the Oscar-nominated actor met the pope in a private meeting at the Vatican along with his dad, George DiCaprio, and the global fundraising chair for the Leonardo DiCaprio Foundation, Milutin Gatsby, according to People magazine.

The meeting allegedly lasted 15 minutes and mostly focused on charity and the environment. DiCaprio gave the pontiff a check he could use for charities that were "close to your heart," The Associated Press reported. DiCaprio also offered the pope a book of paintings and artistry from Hieronymus Bosch, who painted "The Garden of Earthly Delights," which hung above DiCaprio's bed as a baby, he said.

"As a child I didn't quite understand what it all meant, but through my child's eyes it represented a planet, the utopia we had been given, the overpopulation, excesses and the third panel we see a blackened sky that represents so much to me of what's going on in the environment," DiCaprio told the pope.

Francis gave DiCaprio a gift, too - a leather-bound version of the encyclical on the world environment, People reported.

Since taking over as pope in March 2013, Francis has met more than his fair share of celebrities and famous people from America. Here's a look at some of the more prominent people he's met.

We all saw President Barack Obama and Pope Francis greet each other back in September 2015. The two met upon Francis' arrival to the United States and after he gave a speech to people outside the White House lawn.

Welcome to the White House, @Pontifex! Your messages of love, hope, and peace have inspired us all.

But that wasn't the first time the two met each other. Back in March 2014, the pontiff and the president met for 52 minutes at the Vatican, where the two discussed a litany of topics, including the environment, religious liberty and immigration, Religion News Service reported.

The hit actress traveled to Washington when the pontiff came to America with the sole goal of meeting the pope. Her Instagram was filled with road trip photos of her and her sister on their journey to meet the pope.

A yr ago I asked my sister Liza "who do you most want to meet in the world?" She said "the Pope". And here we are! #PopeFrancis #Blessed #DC

This was an especially memorable trip for Longoria since she was with her sister Liza, who the actress called a "hero." Liza is mentally challenged, but as a devout Catholic, she has found the strength to hold a steady job and do almost everything on her own, according to San Antonio Express-News.

Apple CEO Tim Cook's meeting with Pope Francis was to help the pontiff, who's a self-professed "dinosaur" when it comes to technology, get in touch with his techie side, USA Today reported.

Cook and the pope met for 15 minutes in a private meeting at the Vatican that came on the World Day of Social Communications. Francis hopes to see technology help people across the world benefit from the Internet.

"The digital world is a public square, a meeting place where we can either encourage or demean one another, engage in a meaningful discussion or unfair attacks," Francis said. "The Internet can be used wisely to build a society which is healthy and open to sharing."

Cook wasn't the only Silicon Valley star to get Francis' attention. Before meeting with Cook, the pontiff had a meeting with Eric Schmidt, the executive chairman of Google's parent company Alphabet Inc. Schmidt had previously served as Google's CEO for almost 10 years, Religion News Service reported.

It's still unknown what the two talked about, but Schmidt has always been interested in humanity and has even authored a book about how technology can better the world - interests that would sit well with Francis.

Toward the end of summer 2015, the nation was divided over Kim Davis and her search for religious liberty. So it came as no surprise that the United States was shocked when it was reported that Davis and the pope briefly met during his visit to the country.

Davis, a county clerk in Kentucky who refused to perform same-sex marriages, causing controversy across the nation, had a quick meeting with the pope where the two asked each other to pray for the other, The Atlantic reported.

"He thanked her for her courage and told her to 'stay strong,'" Davis' lawyer, Mat Staver, told The Atlantic. 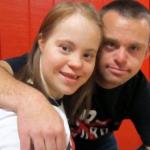 America's Only Restaurant Owner With Down Syndrome is…