Never be bothered by bored children again on long car trips or in long lines. Download a few of these apps onto your mobile device and enjoy a few minutes of peace and quiet while your kids stay quietly entertained.

Ever been standing in a long line in the grocery store with a bored kid hanging on each arm? Ever sit for an interminable wait at the DMV with one child running circles around the lobby, one sorting through your neighbor's purse, and one telling you for the fifth time, "I have to go potty!" At these moments, some type of distraction to keep your kids occupied is absolutely invaluable. In this mobile device era, all you might need is the right app to give yourself a few minutes peace. Here are five of the best free apps for kids to play during car trips, grocery line waits, haircut appointments, doctor office visits ...

It's back - the loveable, adorable little critter that was the key chain pal of kids of the 90s is now available for iPhones and Androids. It includes more than 110 past Tamagotchi characters and over 100 levels of gameplay. You simply connect three matching shapes to feed your pet and make it grow. The best part - there's no clean up, no food to buy, and it won't dirty your rug. It's the best pet a child (and parent) could wish for.

A combination of two popular games, Flappy Bird and 2048, this game challenges you to reach the score of 2048 by tapping the screen so a floating block remains on the board and doesn't hit the barriers. It sounds silly and simple, but I downloaded the app just to test it before writing about it, and I accidentally spent a further 10 minutes trying to pass those frustrating barriers. A testament to its addictiveness.

This appeals to both boys and girls - the robot aspect and action attracts the boys while the unicorn and mythical landscape attracts the girls. Its best aspect is arguably the 80s soundtrack that goes with it. The main gist of the game is you control a motorized steed as it smashes monsters and dodges obstacles. You try to get the farthest score over three tries, making it easy to say when it's the next person's turn to play.

The makers of Real Racing have released a new version of their high quality racing game for free. It includes choices of real cars to race and lots of tracks to try. You can increase the variety with in-app purchases, but that is completely optional. I'll have to keep this game away from my husband.

With better graphics and more varieties of sequences than its predecessor, this app is nothing short of addictive. The goal is to guide your avatar as far as you can without falling off the path. Motions required are simple swipes across the screen and the more coins you gather, the more abilities you can unlock.

You no longer have to dread that long wait at the DMV. Just pack along a mobile device with one or two of these games, and bring a book for yourself. You'll actually be able to read it, for once. 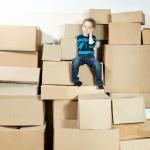 On the Road Again: How to Ease the…