5 lessons 90’s kids should pass on to their children

Growing up in the 90's was great, but there's no time machine that can take our children back there to see what they missed. We have to share the lessons we learned from those years as best we can. Here's how.

It's not just your imagination, the 1990's really were one of the greatest decades in recent history. Besides having some of the best music, toys and television shows, it also saw the end of the Cold War and one of the longest stretches of economic growth and prosperity the United States has seen. We have nostalgia for those days with good reason.

These days, it seems society and life gets ever more violent, controversial and complicated. Our children are not being raised in the same peaceful times we enjoyed. So, maybe, it's time to look back at those good ol' days to see what lessons we learned and how we can teach them to our future generations.

Cabbage Patch dolls, Beanie babies, Tamagotchi, Giggapet, Furby ... those toys are what I really miss about the 90's. Do you remember the hours of fun you had feeding and growing your Tamagotchi, playing house with your Cabbage Patch doll or being annoyed by your Furby? Those were our first experiences caring for something besides ourselves, and we became surprisingly attached to those toys (I still have about 50 beanie babies packed in a box in an attic somewhere). They taught us that love comes in all shapes and sizes and that maybe we weren't the center of the universe after all. Perhaps if today's children had more opportunities to practice their nurturing skills, we could all love each other a little more and get along a little better.

2. Participate in your community

Whether it was Mr. Roger's Neighborhood, Recess, Full House, Fresh Prince of Bel Air or Sesame Street, every 90's kid had a favorite television show that taught them what it means to be part of a community. We learned about why we should reach out and help our neighbors, be friends with people different from us, and work toward a group goal. Do today's kids learn the same thing from the television they watch?

Now remember, the 1990's were just the cusp of the Internet explosion. In those days, we had to listen to that ear-piercing dial-up tone and block all phone calls in order to visit the World Wide Web. There were few video game choices and no texting or universal usage of cell phones, so what did we do? We played outside. And, we got dirty, tore our clothes, skinned our knees and had so much fun. There is no substitute for a breath of fresh air and a barefoot run through dew-kissed grass. Our kids should know that, too.

Do you remember Saturday morning TV that wasn't gross, sexual or just plain weird? These were shows like Lizzie Maguire, That's So Raven, Pepper Ann, Recess, and Boy Meets World. Maybe they didn't all have a take-home moral, but they were clean. Do you know what shows your kids watch now? Take time to sit down with them and watch a few of their cartoons. Make yourself aware of who the protagonists are and whether their belief systems mirror yours. The same goes for the music they listen to.

5. Be prepared for life's difficulties

Remember the huge uproar leading up to the year 2000 when everyone was afraid Y2K would shut down all computer-operated systems and send us back to the dark ages? People stockpiled resources and counted down to midnight on New Year's Eve with more trepidation than excitement. In the end, it turned out the world's computer programmers were prepared enough to avert disaster. But we were prepared, and that's a good attitude to have. You never know when a disaster, natural or man-made, might strike. Teach your children to be physically and mentally prepared for the trials they'll inevitably face in life.

We might not be able to return to the 90's, but we can implement the lessons we learned from those early years in our lives and the lives of our children. Society isn't as carefree as it used to be, so it's up to us parents to help preserve our children's curiosity, optimism and innocence. Bring some of the 90's back to your home. 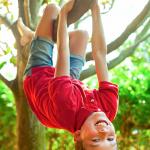 How to Handle an Energetic Child