In the Movie "Inside Out," Pixar Shows Us How to Parent Right, and How to Avoid Being a Helicopter Parent.

Disney and Pixar's hit movie, "Inside Out," is about a young girl named Riley and 5 of her emotions: Joy, Sadness, Disgust, Anger, and Fear.

The movie plays largely in the mind of the main character, Riley; however, the interaction she has with her parents provides us with a lot of information into their parenting style. When looking at this movie in the eyes of the parents, there is a lot to learn.

The movie provides great entertainment, but it also gives examples of how to avoid being helicopter parents when our children go through difficult times.

Note: if you have not seen the movie, this is a spoiler alert.

Helicopter Parenting is defined as parents who are extremely involved in the lives and pursuits of their children, particularly in areas of education. This parenting approach is largely negative with the idea that these types of parents do more for their child than they should- especially when the child can make a decision on their own.

"Some of the challenges helicopter parenting presents are that the child struggles to effectively manage conflict" (which) may lead to difficulty negotiating through conflict adult relationships, developing necessary assertiveness skills in the workplace and lead to anxiety about decision making." Joel Ingersoll, PhD. of the Center of Psychological Health and Fitness, LLC has said.

Here are 5 lessons Disney/Pixar's Inside Out teaches us about how to avoid being a Helicopter Parent:

Don't do their homework. Don't do chores they can do by themselves. This becomes even more difficult when children become teenagers.

Riley's parents demonstrate this concept very well. They encourage her to try out for the hockey team. They allow Riley to go to school on her first day alone. There is an element of trust between them where the parents are letting her make choices on her own.

Riley is left to walk to school alone. Riley is also resourceful enough to buy a bus ticket back to the Midwest. For an 11-year-old that is quite resourceful. So, when properly motivated, yes, children can figure out how to do things. If children do not seem resourceful, it is probably because they are not motivated.

This is hard for helicopter parents. They usually focus on what may go wrong. While sending your child to school alone once you move to a new city might be too difficult, there are things parents can do.

The end of the movie shows Riley breaking down. What is most remarkable about this is that her parents are doing exactly what parents should do. They are silent. They allow her to cry. They allow her to feel. It was the first time we were able to see her go through a myriad of emotions, led by sadness. It's a beautiful moment.

Teach Children They are Not the Center of the Universe

Riley's mother recognizes her disappointment after they move. There is a scene where she talks to her before she goes to bed and thanks her for staying happy because of their situation. She encourages her to stay positive despite the truck being late and their move.

As Children Grow, So Does Their Independence

One of the saddest moments of the movie is when Riley's imaginary friend, Bing Bong, sacrifices himself for Joy to escape the memory dump. While Bing Bong was Riley's closest and dearest friend, Riley's needs have changed.

One of the most beautiful lines in the movie comes from Bing Bong himself after he sends Joy to safety. His final words are, "Take her to the moon for me."

Bing Bong realizes Riley has changed and that his purpose has been fulfilled. She is now ready for new adventures and the memory dump allows new memories to have a place in her life. It is a beautiful moment.

In the movie all of Riley's joyful experiences were also connected with her sad feelings.

Take for example the scene where she realized that she lost the hockey game and that her team rallied around her anyway. The negative emotion, the sadness, made the next emotion even more pronounced and powerful.

Pixar displays such a wonderful range of emotions and growth for Riley and her parents. These are wonderful lessons for parents and children.

I have no doubt that Riley will grow and develop into a healthy adult. It's the hope parents have for their children.

This article was originally published on Smarter Parenting. It has been republished here with permission. 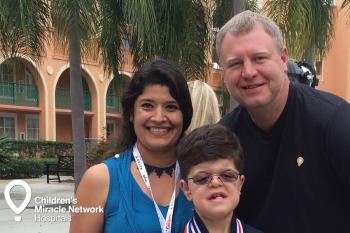 What Two Parents Wish Others Could See About…