5 Lessons to Learn From David and Goliath

There Are Timeless Lessons to Be Learned From the Story of David and Goliath. Take the Time to Share With Your Family These five Lessons That You Can Apply to Your Lives Now.

The story of David and Goliath intrigues most who read it. A young man, who never fought in a war in his life, defeats not only a champion, but a giant who everyone fears. As you teach this story to your children, take the time to share these lessons that we can learn.

1. The Lord calls whom He will call

Before he slays Goliath, David's family had been visited by the prophet, Samuel, and been anointed to be the next king. This despite the fact he was the youngest and only tended sheep. The Lord said to Samuel, "the Lord seeth not as man seeth; for man looketh on the outward appearance, but the Lord looketh on the heart." (1 Samuel 16:7) The first lessons to learn from David is that the Lord can make who he wants into his instrument. It is up to us to be willing to accept that call and act.

When Goliath made his challenge to the Israelis they were terrified. They did not remember that they were the covenant people of the Lord. David remembered when he asked, "Who is this uncircumcised Philistine, that he should defy the armies of the living God?" (1 Samuel 17:26) Goliath was strong as to the strength of men, yet he was defeated by a young man - a teenager, really. Why? Because David had the strength of the Lord behind him. The second lesson is that being on the right side of the Lord makes you stronger than anything.

3. The Lord prepares his servants

Although David was not skilled in the art of war, he had fought battles to protect his sheep. He had killed lions and bears when they attacked his sheep. He knew it was the Lord that had helped him defeat these enemies. With each success at protecting his flock, David was prepared for successive battles including his eventual face off with Goliath. Each success gave him more confidence in his abilities. He didn't just show up at the battlefield having never relied on the Lord for strength. The third lesson is that each small challenge you face and beat prepares you for future challenges.

Before David faced Goliath, Saul offered his armor and sword. David put it on. He soon realized it was not going to work. He said, "I cannot go with these; for I have not proved them." (1 Samuel 17:39) He knew he was not a warrior in the traditional sense. He had not fought in armor before. Pretending he was something he wasn't would only hinder him from being able to do what he knew how to do. He was accustomed to using a sling to defend. The fourth lesson is to remember who you are and act accordingly. A favorite quote of my father is "what e'er thou art, act well thy part." When you honor who you are and don't pretend you are something else you will be more successful.

When David went to face Goliath he knew that his sling was in good condition. He didn't keep it stored away, he used it. He also knew what kind of stones he needed for his sling. He "chose five smooth stones out of the brook." (1 Samuel 17:40) David knew and was familiar with his weapons. What weapons do you have? Your weapons are your faith, knowledge of the scriptures, your obedience to the commandments, and the truth. The fifth lesson from David is to know your own weapons. Be familiar with them and be ready to use them.

Stories like David's may have happened long ago, but the truths taught, and lessons learned from such stories are timeless. When you read the scriptures with your family make the effort to look for the lessons learned that apply to all. 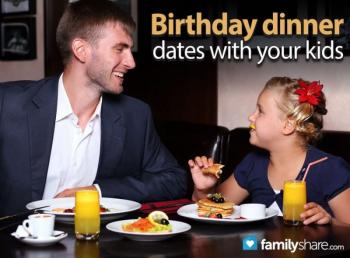 Birthday Dinner Dates With Your Kids