5 movie characters who probably have autism

I was always afraid I'd have a child with autism. Why was I so scared? Because I didn't have a positive frame of reference. These famous movie characters embody much of what autism looks like in our house.

I always knew I'd have an autistic child.

Well, knew is a strong word. If I'm being honest, I was always afraid that I'd have an autistic child. I was pregnant during 2005 and 2006, and the news around autism was reaching a fevered pitch, but none of it lined up. There wasn't a lot of actual, useful information; just a lot of noise.

I remember feverishly researching autism when my son was young, checking off milestones as he hit them - or not - and tried to predict his neurological future. I was right, in case you were wondering. My oldest son is on the autism spectrum. Now that I've lived with him for nearly seven years, and now that I have a master's degree with a certification in educating children on the autism spectrum, I look back and wonder:

Why was I so worried?

I've come to the conclusion that my worry was caused by the images of non-verbal children who never expressed a single emotion. For many years, Dustin Hoffman's portrayal of Rainman stood as the quintessential media portrayal of a person with autism, and the image frightened many parents, myself included.

However, as we see autism grow in prevalence, 1 in 88 children in the U.S. struggle with some form of autism, there has been little in the way of depicting autism as something other than scary or weird. Had I known what my son was going to be like, I wouldn't have been so nervous.

And so I want to share a list of beloved characters who show some autistic tendencies, some of the traits that make my son who he is. These traits aren't big, bad or scary. They just are.

Mr. Frederickson doesn't talk much, and doesn't seem to make a lot of eye contact either. He has a narrow set of interests which he focuses on. He relies heavily on routines and has a tantrum or meltdown when someone disrupts his routine. It's important to note that Mr. Frederickson had emotions, very strong ones. He wasn't unfeeling - but instead had difficulty expressing those emotions properly.

Flint Lockwood - Cloudy With a Chance of Meatballs

Flint Lockwood fancies himself a genius scientist, but nobody around him believes in him. He has that narrow set of interests again, and struggles with interpersonal communications, even connecting better with animals than he does with humans. However, when he's given a chance to flourish, it turns out he really is a genius, and he just needed someone to see past his idiosyncrasies.

C-3PO is not, of course, a human. But since most of the Star Wars universe isn't technically human, who am I to judge? C-3PO struggles mightily with interpersonal communications. He's very literal and has difficulty understanding the human emotions around him, and is often baffled as to how R2-D2 can possibly understand what is happening between their human companions.

Garth likely has several diagnoses that would describe his character aptly. Some of his behaviors mimic parts of autism, though. Like the fact that he has difficulty picking up on social cues, struggles with social interactions, avoids making eye contact with anyone (except the camera), has a narrow range of interests, and seems to have some motor and other developmental delays. Notice that the word is delays, many children with autism will catch up eventually (though, of course, some do not.)

Don't get mad. This is one of those comparisons that some people get upset about, but there really isn't a reason to do so. Spock has a very limited range of emotions, and has even more difficulty expressing those that he does manage to understand. He's extremely literal, struggling to understand idioms and subtle things like body language and facial expressions. He's also extremely intelligent - displaying some of the savant-like tendencies that many people on the autism spectrum have.

I think if I'd had a positive frame of reference for some of these behaviors, I wouldn't have been so afraid of an autism diagnosis in my household. Now that I've lived with it, and now that I know just how wonderful this little boy is, I want everyone to understand that autism isn't necessarily a scary thing. It's just a thing. A thing that you're probably more familiar with than you think.

Gina Denny is a homeschooling mother of three, living in Phoenix, Arizona. You can read her blog at ginadenny.blogspot.com or reach her on twitter @GinaD129
nextarticle 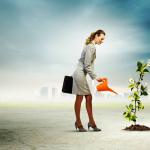 Some People Are so Poor, All They Have…