While there are no shortage of social media sites available, parents may not be aware of where their teens are hanging out online.

Facebook is the number one social site and has secured that spot for some time. Everyone is on Facebook, right? Maybe. But for that reason alone, most teenagers have gravitated away from where their parents and grandparents hang out. They are sharing information, pictures and video on websites and smart phone apps that you may have never even heard of.

Here is a list of five social media smart phone apps your teens are using and what you need to know about them.

While you may have heard of Twitter, most adults over 30 are not using the social site which is exactly why all the teens are there. Sending messages in 140 characters or less, Twitter is the new Facebook. For parents, the great thing about Twitter, unlike Facebook, is you don't necessarily have to become "friends" with or "follow" your teen to know what they are up to. Just search for their name in the Twitter search bar, click on their account and now you are in the know. You can see who their friends are, their public conversations and pictures and videos they have posted.

Vine is an app that allows you to create and post a six second looped video that is usually shared on Twitter and Facebook. Seems harmless but Vine has been known for inappropriate content with sex, violence and drugs so much so that it has earned a 17+ rating in iTunes.

The hottest trend in social apps, Snapchat has a reputation for being quick and dirty. Sending a picture or video that disappears after 10 seconds or less gives a false sense of security and sexting is the biggest problem with this app. Teens who believe their picture has disintegrated into thin air would be surprised to discover the receiver of their picture took a screen shot or a picture using another device.

Instagram is most known for picture sharing and has recently launched video sharing similar to Vine. As a parent, if you want to know what your kids are up to and who they are hanging out with, check out their Instagram pictures, videos and the comments made by their friends. Similar to Twitter, you don't have to follow your teen to see their posts.

Probably one of the most disturbing apps available, Ask.fm allows users to ask other users questions anonymously. Sounds harmless? Some questions are simple and innocent to teens such as, "Who is the hottest guy in school." But, because of the anonymous factor, Ask has become a breeding ground for online bullying. Relentless attacking of image, self-worth, secrets and rumors have catapulted Ask.fm into the media spotlight with related bullying cases such as with 12-year-old Rebecca Sedwick of Florida who committed suicide due to the alleged bullying from several teenage girls.

The recent update of the social app has eliminated the option for the anonymous user, however teens are smart enough to bypass the system with fake account names. Like most of the other social apps, parents can search for their teen's name, locating his account and keeping tabs on their child.

Keeping up with your teenager is difficult and overwhelming. Communicating with them is the best way to know what's going on but sometimes snooping a little helps. Don't feel bad about it and remember, knowledge is power.

Chanda Gunter is the owner of Get Noticed!, a Public Relations and Digital Media company based in Salt Lake City, UT. She provides a wide variety of PR, web design and digital marketing services and consulting. Connect with her on Twitter @ChandaGunt
nextarticle 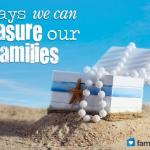 3 Ways We Can Treasure Our Families