5 Ways to Build Character in Your Sons

The World Needs Men of Good Character. Parents and Others in Positions of Authority Have a Powerful Influence in Helping Boys Develop These Characteristics.

We've all heard the statement "boys will be boys." It's often used as an excuse for bad behavior. There is no question that boys are, generally speaking, rough and tumble beings; ready to conquer the world. They want to be tough, even if they're not. They want to appear macho to their peers. That's normal for a guy. Because of this inner need to be strong and fearless they can find themselves in compromising situations just to prove the fact. Sometimes it means taking a dare, even if it's a stupid dare - and most dares are - to prove their manhood. Somewhere along the way parents and teachers hope these young men will get the picture, wake up and start thinking more about what's right than what's popular.

Recently it was reported that an entire football team was given a chance to start doing a little of this kind of thinking. Union High School football coach, Matt Labrum in Roosevelt, Utah, suspended his entire team because of inappropriate behavior. The players were stunned.

After learning about the unprecedented disciplinary action of Coach Labrum, a mother posted the news article about this incident and made this comment: "Awesome!!! What a great coach we have here in Roosevelt!" Within 24 hours, the whole nation knew what had happened. Praise came in from all around the country in support of someone who was willing to put character-building above winning games.

What had these boys done that warranted this action? Besides cyber bullying a fellow student, they were failing and skipping classes and showing disrespect to teachers; all unacceptable behavior. Here is the news report.

Coach Labrum met with the team and taught them some serious lessons in character. "We looked at it as a chance to say 'Hey, we need to focus on some other things that are more important than winning a football game,'" Labrum said. "We got an emotional response from the boys. I think it really meant something to them, which was nice to see that it does mean something. There was none of them that fought us on it."

A week later the news reported a favorable response from the boys. All who complied are now ready to enter battle on the playing field again. But this time with a clearer understanding of what it takes to win in the battles they will face in life; battles that will require character to succeed.

5 things parents can do to build character in their sons

How can young men develop good character traits if they don't know what they are? Define what character means. You'll find most dictionaries say character is the combination of qualities or features that distinguish one person, group, or thing from another. Ask your boys what kind of person they want to be known as. What is it that defines their character? One way to help them think seriously about this is to ask, if they were to die tomorrow what they would hope someone would say about them at their funeral? That will put it in a here-and-now perspective. Most everyone wants to be remembered for being a good person. Have them list the traits they would want mentioned that define their character.

2. Support others who are trying to help your sons build good character traits

If there are leaders in your sons' lives who are not doing this, but are letting them and their peers get away with things that are detrimental, go have a serious talk with these people. Let them know what you expect from their leadership. On the other hand, when leaders and teachers discipline your child for misbehavior, don't go against them. You can give your son loving support as these disciplinary actions are taken, but do not excuse your son. If you do, you will be denying him a valuable opportunity to grow.

3. Praise your son when he does something that shows his good character

Let him know that it takes courage to do what is right. If he's done something wrong and wants to make it right, praise him for that. Don't let him off the hook, but rather stand by him as he makes it right.

Family therapist Jonathan Decker said, "When males confess a mistake or apologize for wrongdoing, they're being vulnerable with you, which is probably a huge risk for them (remember, many have been socialized to believe, on some level, that vulnerability pushes people away.) Reinforce their honesty and responsibility-taking by openly recognizing the courage it took to tell the truth and by letting them know how much it means to you that they're taking ownership of their actions." (Meridian Magazine, Sept. 27, 2013)

4. Let your sons know how much you love them

They never outgrow the need to hear the words "I love you, son" no matter how macho they may try to appear. Along with the words, they need our patience and consistency. They need to know we have confidence in them, in spite of their imperfections.

As your sons watch you, they will learn what being a person of character means. Author Wilferd A. Peterson hit the target when he said, "Our children are watching us live, and what we ARE shouts louder than anything we can say."

The future is depending on this generation of young men (and women.) Think of the good that can happen if young men are brought up and encouraged to be noble, courageous, honest, dependable, and caring. We can make a difference with every boy we help in developing these character traits. 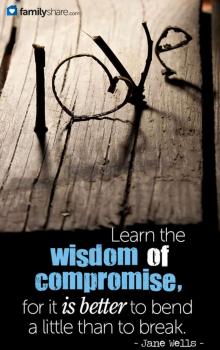 10 Lessons to Learn About Marriage