No matter how many times you've read the Good Book, there might be a thing or two you still don't know about the New Testament.

Theological scholars aren't the only people who know a bit about the Bible. According to study by the American Bible Society, more than 88 percent of American households reported owning a Bible in 2014, The Huffington Post reports that eight in 10 Americans believe the Bible to be either the literal word of God or inspired by him. That said, there still might be a thing or two you didn't know about the Good Book - even if you aced Sunday School.

Here are six facts about the New Testament that you may not know:

1. The New Testament was written by Jews

If you visit a synagogue, you probably won't find many copies of the Bible. However, Jews wrote the books that make up the New Testament - from Matthew to Revelations. In fact, almost every author in the New Testament was Jewish.

If there's one book of the Bible that people can recite by heart, it's Luke. After all, the second chapter of the third gospel is the most famous account of the birth of Jesus. You might be interested to know, however, that there is some dispute around the Luke's genealogy.

According to Zola Levitt Ministries, this is a significant fact, because Luke wrote more of the New Testament than any other author. His words are included in his gospel as well as in The Acts of the Apostles. Many people assume that Luke was a gentile due to the fact that Paul did not list him among the circumcised in Colossians 4.

The name "Jesus" may be the most widely recognized name around the world; however, the Messiah's name wasn't actually Jesus. His real name was Yeshua, a Hebrew word meaning "salvation." In fact, when the angel Gabriel spoke to Joseph the carpenter, he said that Mary's child would be "Yeshua", meaning that he would be the salvation of his people.

4. Jesus really was the king of the Jews

When Jesus was crucified, Pontius Pilate, the Roman governor of Judea, had his cross inscribed with "Jesus of Nazareth, King of the Jews." Although Roman guards mocked this title by giving Jesus a crown of thorns, Jesus' claim to the throne of Israel was real. According to the genealogy recorded in the first chapter of Matthew, Joseph the carpenter, as a descendent of David, would have been the crowned king of a sovereign Israel. Jesus would have been his legal successor.

5. Jesus wasn't the first one to be baptized

John the Baptist played an integral part in the New Testament; after all, he baptized Jesus and introduced the practice of baptism by immersion. Or did he? Actually, Jews practiced ritual washings - even by immersion - for centuries before John's time. According to Hebrew law, Jews were required to wash by immersion in many situations, including: brides before their weddings, priests before service, men before the observance of Yom Kippur and of all new converts to Judaism.

6. The gospels are not all first-hand accounts

As apostles of Jesus, it's easy to assume that Matthew, Mark, Luke and John wrote about events as they experienced them. This, however, is not the case. Matthew and John were present for some of the events they recorded, but not all.

For example, scholars are fairly certain that Matthew and John were not present for Jesus' birth, or when Jesus spoke to Nicodemus. Additionally, Mark and Luke were likely not eyewitnesses to Jesus' mortal ministry at all. In the first chapter of Luke, the writer states that "many have taken in hand to set forth in order a declaration of those things which are most surely believed among us."

Scriptorian or not, everyone could use a brush-up on the world's most inspired and timeless piece of literature. Check out NBC's upcoming "A.D. The Bible Continues" premiering April 5 to learn even more. 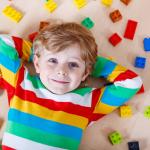 Kids Aren't Expensive, But That Other Thing Sure…