6 leadership traits your family can learn from Moses

Through the study of Moses and his story, your family can learn how to be righteous leaders. Moses exemplifies 6 traits of leadership that will benefit you and your family as disciples of the Lord.

As the author of the first five books of the Old Testament, Moses figures prominently within the canon of Old Testament prophets. At the end of the book of Deuteronomy it records, "And there arose not a prophet since in Israel like unto Moses, whom the Lord knew face to face." (Deuteronomy 34:10 KJV) The story of his life from his birth and adoption through his leading the people of Israel to the Promised Land fascinates children and adults alike, as is evidenced by the popularity of the epic film, The Ten Commandments.

This important figure within the history of God's people ought to be studied and taught within your families. Following the example Moses set as a leader by emulating the character traits he developed and exhibited can help each member of your family become a better disciple of Christ.

Recognizing God's hand in our lives

In the second chapter of Exodus, Moses records how his mother bore him, hid him and then placed him in a basket and floated it down the river. He then tells how he is found by Pharaoh's daughter and raised by her. One could strike this all up to coincidence, but it is important to recognize that of all the people who found him it was a member of the royal family. Only she would have been capable of keeping him and raising him, no questions asked. It was God's plan.

When God calls, we need to listen

In Exodus 3, Moses sees the burning bush and says, "I will now turn aside, and see this great sight, why the bush is not burnt." (Exodus 3:3 KJV) Then when the Lord calls to him from the bush, Moses answers, "Here am I." Moses did not know what caused the bush to burn, and yet he felt the pull towards it, most likely the Lord's spirit. And when he was called he didn't say, wait, I need to tend these sheep first, he answered, "Here am I." He was willing to serve without knowing what that would entail. It is the same response as other faithful prophets would give when called.

Uncompromising of what is expected

After each plague, Pharaoh would say he would let the Hebrews go on certain conditions - if the plague was lifted, if they didn't go far from the land of Egypt or if only the men went to offer sacrifices to the Lord. But Moses would not compromise. Each time he went into Pharaoh he would tell him, "Thus saith the Lord God of the Hebrews ... let my people go, that they may serve me." (Exodus 10:3 KJV) A good leader in Christ does not compromise his values or his mission.

Persistence in the face of adversity

Moses never falters from going before Pharaoh and demanding the Israelites be set free. Each time Pharaoh says no or reneges on his promise to let the people go, Moses continues in his mission. He does not go back to God and say, this is too hard. It is never going to happen.

He demonstrates this persistence again as he leads the Israelites to the promised land. Even though they murmured for food and then for water, he continued to lead them, to guide them and to teach them.

When the Lord first called to Moses from the burning bush, "Moses hid his face; for he was afraid to look upon God." (Exodus 3:6 KJV) In other words, he was humble and recognized he was in a presence greater than his own. Great leaders in the gospel also recognize that they are servants to the Lord as well.

Moses was also humble in his weaknesses. When he was first called of God he said, "O my Lord, I am not eloquent, neither heretofore, nor since thou hast spoken unto thy servant: but I am slow of speech, and of a slow tongue." (Exodus 4:10 KJV)

Moses also had to learn to delegate. A great leader cannot do all the work himself and must learn to ask the help of others who are faithful. When Jethro, Moses' father in law, arrived at their encampment he noticed that Moses had to do oversee all the disputes among the people. Jethro told him he needed to share this responsibility with others or he would wear himself out. (Exodus 18) Moses followed this advice and became a better leader for it.

At some point you and your family will need to help others in their discipleship in Christ. By following the example of Moses, you can be successful in this responsibility. 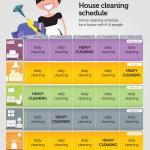 How to Plan to Clean Your House