6 signs your kid has been replaced with a robot

Has your child been acting a little strangely lately? Chances are they are actually a robot impostor. Here are six clues your kid has been supplanted by a cyborg.

It happens when you least expect it - your child's usually predictable behavior abruptly changes. Without warning, their tastes are suddenly different, their habits all seem new, and you almost can't recognize the kid you knew. You look at them, and they seem normal. Yet, underneath that innocent smile something sinister is lurking. Your kid has been replaced by a robot. You are going to have to act quickly to have a chance of saving your real child. Here are the warning signs that you have a major problem on your hands:

The Kids' Code of Conduct expressly forbids the willing ingestion of anything known to be healthy, especially vegetables. Every kid knows that green foods are for St. Patrick's Day or Dr. Seuss' "Sam I Am," and should only be eaten after extreme coercion by an adult. If children just went around eating veggies willy-nilly, they would have little leverage for dessert. A robot, on the other hand, is trying to appease you and gain your trust. Be extremely wary.

Blanket forts are a crucial part of a child's defense against bad guys, mean dogs and younger siblings. The construction of these fortifications is instinctive, and the behavior can last long into adolescence. Robots, in contrast, are typically armed with lasers, hidden mini-machine guns and proximity mines. They don't need blanket forts for protection.

Kids need to get all of their instructions from television and movies - how to act, what to say, how to defeat evil super villains. The thirst for this vital information drives them to view hour after hour of programming, constantly gleaning guidance and direction. Robots get all of their directions from a wireless link to a central computer at a command station. Watching TV would just scramble their software.

Junior happily goes to bed at the appointed bedtime

The entire point of having a bedtime is for kids to try to stay up later than they're permitted. That deadline on the day's activities represents a line in the sand. When a youngster steps over it he is asserting his right to make his own decisions. Robots don't make their own decisions, they operate under the parameters of their programming. It doesn't matter to them when they go to bed because they're just going to lie awake plotting your destruction all night anyway.

Your kid is constantly plugged in

I don't mean they're using electronic devices all of the time. I mean, there's a cord coming out of their body and plugging into an outlet in the wall. When you enter the room they will nonchalantly unplug and hide the cord as if nothing unusual was happening. It's best for you to play along, so they don't know you suspect anything - yet.

They do what you ask them to do

Real kids will do what you ask them to do eventually, if they feel like it, after delaying, asking "why?" several times and hoping you will forget. They are usually too busy doing important things like trashing their rooms to be bothered with menial tasks like setting the dinner table. However, robots have both the processing power and physical energy to quickly complete your requests. They are keen to avoid unwanted attention from you that might lead to their detection. They're more attentive than a mouse in a cat farm.

On second thought, other than the fact that they are planning to murder you in your sleep, robots are not bad children. In many ways, they can be an improvement on your original kids. With a little vigilance and some high-tech weaponry, you might happily parent your new robots for many years without major incident. A word of advice: Be sure kick to them out of the house when they turn eighteen. Adult robots receive firmware upgrades that make them substantially more deadly.

Dan Florence is a humor blogger, high-tech product marketer, photographer, and a bunch of other impressive stuff. Read his comedy at danoftheday.com, see his photography at danflorence.com, or check out his vintage 3D gifs at vintage3d.tumblr.com.
nextarticle 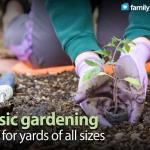 Basic Gardening Tips For Yards of All Sizes