A Word From Parents Who Just Wish Others Could See How Wonderful Their Children Really Are.

Sesame Street recently released a new character named Julia, but she's a little different from the rest of the characters - she has autism. In the scene where Julia is introduced, Big Bird notices that Julia is acting a little strange: she's very focused on her artwork and doesn't talk to Big Bird when he tries talking to her.

The host explains to Big Bird that Julia has autism, and a few other Muppets come along to help explain to Big Bird what that means. They tell him that Julia doesn't always do things the way he would expect, but rather, she does things in her own "Julia" sort of way.

Since her introduction, Julia has gone viral, and Sesame Street (though it has been popular for several decades) has gained even more praise and fame for Julia's character.

But no one is more excited about Julia than the parents raising autistic children. People with autism often go their whole lives being misunderstood, which can be especially difficult for children. Here are six things parents wish other people knew about their child:

1. Their autism is only a small part of what makes them who they are

A child with autism is still a child. They want to run around and play with their friends. Sometimes my child is a little rowdy, but so is every other child their age. Just because they seem a little different, doesn't mean they shouldn't still be a kid. My child is much more than their autism.

2. They really want some friends

Nothing breaks a my heart more than when my child comes home from school upset because no one wanted to play with them at recess. At school, my child can be isolated and lonely in a place where I can't help. As a parent, you can help your children be friends with everyone. Teach your children about autism and help them understand why it's so important for them to reach out to all of their classmates. Teach them to be friends with my child.

Children with autism often don't understand figures of speech or metaphors. Please don't get upset when you say "hold your horses," but my child keeps doing what they're doing. They understand language and life just a little differently than you do.

4. Their senses are much more acute than yours or mine

Sights and sounds that seem ordinary to you or to me are much more intense for my child, which is why they're sometimes set off by things around them. That's why it's so important not to yell at my child, even if it's to get their attention from across the room. Instead, please walk up to my child, make sure you have their attention and speak calmly.

5. They still need love, even if they don't show it the same way other children do

A lot of children with autism reject physical attention, which I know can be heartbreaking for mothers who just want to hold their kids close. But just because my child doesn't want that physical touch doesn't mean they don't want your love. If other children are responding with hugs and hi-fives, my child might just want some words of affirmation. Please don't just ignore my child because you're afraid of upsetting them - work with them and figure out what will make them happy. It doesn't take much time, but it makes a big difference.

6. They communicate differently but that doesn't mean they don't communicate

My child knows what they want to get across, but she sometimes doesn't know how to describe her feelings to you. Please be patient; she's trying to use a language that is hard for her. There are many effective ways to communicate with children who are completely nonverbal, and there are even some apps and tools made specifically for children with autism. It's not impossible to communicate with my child, but it does require a little creativity.

Every child is different and deserves to be treated as an individual - regardless of whether or not they have autism. Hopefully with Julia's character in Sesame Street will help children with this spectrum be better understood. 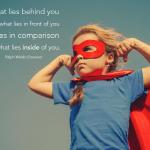 7 Inspirational Quotes to Get You Through the…