We all need to be fully aware of both our strengths and our weaknesses if we are to live happy and productive lives.

Each of us has moments of weakness in our lives that result in poor choices. Sometimes those poor choices leave us with areas of vulnerability in our characters. Those weaknesses can then again become points of vulnerability, if we are not careful. Even after we have sincerely repented of errors and moved on, it remains important to build internal fortifications against areas of weakness, so that they don't become problems for us again.

Know your areas of weakness

In Greek mythology, an area of weakness was sometimes referred to as an Achilles' heel. While the mythological origin referred to an area of physical vulnerability, the use of the phrase today refers to any kind of attribute or quality that could lead to failure. Wikipedia defines an Achilles' heel this way: "An Achilles' heel is a deadly weakness in spite of overall strength that can actually or potentially lead to downfall." We need to be keenly aware of both our strengths and our weaknesses.

Recognize that weakness may lead to collapse

We find examples of these kinds of character weaknesses, that led to someone's downfall, played up in the media on a somewhat regular basis: The greed of financier Bernie Madoff that ended with his imprisonment and the suicide of his son; The lust and infidelity of Senator John Edwards that destroyed both his marriage and his once bright political career; The drug addiction of actor and musician Corry Monteith that cost him his life; The pride and perjury of English cabinet member Jonathan Aitken that cost him seven months of freedom and his future.

It is important to remember that none of us is immune to weakness. To engage in risky behavior in the belief or hope that you may not get caught is foolish. Even if you are not caught, at the very least, you will suffer the loss of your personal integrity.

Guard against old areas of weakness

One notable politician who made a noisy fall and then staged an astonishing comeback was Bill Clinton. Former President Clinton admitted his infidelity publicly, tearfully apologized to those he had hurt and asked for forgiveness. Clinton said, "I have repented. I must have God's help to be the person that I want to be." He eventually fully recovered from his mistakes and moved on with his life. A long-term consequence of his behavior is that he is still left with a potential area of weakness that he must guard against. The same thing is true of anyone who has succumbed to serious weakness.

Just as the military builds physical fortifications against weak areas to guard against enemy attack, we must build internal spiritual fortifications to protect us from our own weaknesses. As nuclear physicist and Christian Richard G. Scott stated, we must "fortify weak areas to create strength." He went on to say, "The Lord sees weaknesses differently than He does rebellion. When the Lord speaks of weaknesses, it is always with mercy."

How can we build internal spiritual fortifications against areas of weakness?

1. Trust in God and surrender your weaknesses to Him

3. Seek forgiveness from family and friends you have wronged

5. Stay active and involved in a supportive community of faith

6. Get outside yourself and help those around you

Remember to involve your family in your efforts to build internal fortifications. Give them the opportunity to be supportive. If they understand what you are trying to do, they can rally round and help strengthen not just your weaknesses, but theirs as well. Each of us has moments of weakness in our lives that result in poor choices.

God will show us mercy in our weakness, if we will ask for his help. 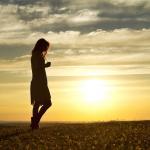 Prayer: You Are Never Alone