Moms Don't Have the Luxury of Getting Grossed Out.

Let's be honest, kids are messy. And you may not think of babies as gross, but they are. The things you go through when raising kids is a germaphobe's nightmare, yet moms deal with it.

Warning: this article is not for faint of heart.

Admit it. You've sniffed your baby's diaper to see if she needs changing. And it's not even weird, until you stop and think about. In general, changing diapers becomes second nature once you have a kid, but have you ever really thought about it? Perhaps you purposely don't, otherwise you may realize that you are changing a diaper full of someone else's .... er ...bowel movements. And let's be honest, some of those diapers are pretty gross, not to mention the task of making sure every nook and cranny of your baby's bottom is clean. Let's not even discuss the dreaded diaper blow out. Yuck.

2. Using your shirt as your baby's personal tissue

Babies don't know how to blow their nose, so mom has to do it for them. The gross sound effects and the terribly nasty "victory" of finally clearing out a nostril is enough to make most people turn green. As your children get older, there might not be a tissue in sight, meaning fingers and clothing make fine replacements. Ick.

Spittle, throw up, puke, "angel nectar", vomit ... however you want to say it, it all means the same thing; something coming out of the north end of your kid. In the beginning, it's like the end of the world when your baby spits up all over you, but for the seasoned veteran mother, it doesn't even phase you. Just wipe it off and keep going. Without you realizing it, that spit up smell becomes your new fragrance.

There are some people who wouldn't dream of eating a half-eaten anything. The thought of licking the same ice cream cone as someone else is just too much. And drinking from the same straw? Never. But for moms, it's just part of life. If you're eating something, you better believe your kids will be asking to share within seconds. (It's like they have supersonic hearing or something.) And since you lecture them on the act of sharing about every hour of the day, you can't say no. Instead of rejecting that backwashed sip of juice, you're thankful to get one last swallow.

5. Used your hands as the garbage

When your child decides they actually don't like ham and cheese and there isn't a garbage bin nearby, you've let your little angel spit out their food into your hands. You've also used your hands (or body) to prevent some throw up from getting on your child and you have definitely needed to put your fingers in your child's mouth to make sure they weren't about to swallow something they shouldn't.

6. Finding out the bathtub has been confused with the toilet

If you thought changing diapers was gross, wait until you start potty training. Kids don't just "go" in their diapers and toilet. Rather than being contained to a diaper, everywhere in your house, car and the rest of the world may need wiping up. And in case accidents happen, there's the task of dealing with dirty underwear that may have been hiding in the hamper for a few days. You get so used to poop as a mom that when you do find it, it doesn't even surprise you anymore. Fun!

7. Cleaning your child's face with spit

Never in a million years would you think of using your own spit to clean someone else's face, until you had kids. The good old spit clean is a great way to get food, dirt and whatever else you find on your child's face off in a jiffy. Whatever works, right?

Have I grossed you out enough already? If you're a mom, probably not. For those who have yet to experience the awesomeness of being a mom, don't let this list turn you off from being a parent. It's almost as if your ick factor gets turned off as a parent. While there are few things on this list I actually dreaded dealing with otherwise I was more than happy to help my child out with these less than fun acts. 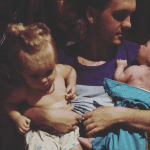 17 Important Lessons From a Mother of 4