There Are Still Things We Want -- Even as Adults -- That We Would Write to Santa About. and These People Did.

Yesterday's kids wanted the same things for Christmas as today's kids — only slightly different: music, Hot Wheels tracks, Stretch Armstrong, batteries for their electronic devices, a Mystery Date in some form or another.

Adult wishes for the holidays tend to be a little more diverse. And grown-ups haven't written letters to the North Pole since Captain and Tennille were at the top of the pop charts.

But if they were to put pen to paper this year, they may express sentiments similar to those expressed by these fully grown individuals:

Dear Santa; I have been — mostly — a very good woman this year and have, therefore, composed a short list of all things I am asking for Christmas. I would like Hugh Jackman for a day and for Josh Groban to write a love song about me. Also, I would like to be a size three (a size I haven't been since I was 3). If the size-three thing can't happen, that's OK. I understand that even Santa can only do so much. If such is the case, then I would like my husband to have that eye surgery that narrows his pupils and retinas so that when he looks at me I at least look like a size three. At very least, please send me two leg warmers for my audition for "Flash Dance," the new stage musical. Do what you can.

Santa; What I want is not really for me. It's for humanity. Please help BYU fans and Utah fans to be kind to each other and respect each other's team. And, when BYU beats them next year, let the Utes be gracious in admitting that the Cougars are better in every conceivable way. Also please have Pete Carroll dismissed as head coach while not diminishing Seattle's chances at another Super bowl.

Dear Santa; I want to be in a boy band. There is another guy here in accounting who wants to do it with me. He thinks he can get his wife's permission, so all we will need is two more guys, some cool clothes and to be able to sing and dance. We will also need our hair back. I can't see this happening without hair.

Santa; I need to be able to turn the water off in the bathroom and to fix the leak under the sink in the kitchen. I have tried to hot glue the cabinet under the sink shut so that the kids don't let out whatever is breathing so heavily. But I know that the leak is eventually going to cause a sinkhole like in Florida and we will be on the news for all the wrong reasons. Santa baby, slip a plumber under the tree — and bill it to my ex-husband.

-Too Damp in Draper

Some of the letters are a little more serious.

Dear Santa Claus; I need to find a way to help my son get off drugs. He keeps lying to me saying that he is clean, but I am not stupid. I keep praying that he will get caught by the police so he will have to fess up and get help, but that hasn't happened yet.

-Need to be a better parent in Lindon

Dear Santa; I can't talk to my kids about things that are important. Whenever I get serious they get all sarcastic and make jokes and then I get frustrated and it ends badly. I just want to talk to my kids. And a better paying job.

Dear Santa; My wife has to work too much. She would love to be a stay-at-home mom and do all the things with the kids that would make them both happy. The problem is that I don't make enough money and my prospects aren't good. Please help me find a way to either get more education or discover a talent that people will pay for. Also, dental insurance that make me look presentable would be good. And wool socks that can double as puppets.

That last letter is mine. Just putting pen to paper for Christmas. 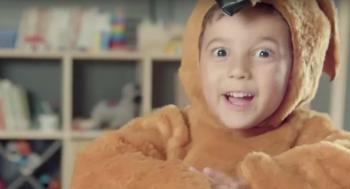 This Video is a Major Wake-Up Call to…