What does it mean to be an intentional parent? The term "intentional parenting" seems to have originated sometime in the 1990's. It's become popular in the last several years, particularly in many faith-based communities.

The first rule of intentional parenting is: Don't leave parenting to chance. Once you've made the decision not to parent on auto-pilot, the next step is to determine what values matter most in your family. You and your spouse must be on the same page. If you're not, your children will be confused, and they won't be sure what the family values are.

Here are 7 practices for intentional parents

Once you and your spouse have agreed on the values that matter most in your family, be consistent with how you reinforce the implementation of those values. And don't change them midstream. For example, remember to be a parent and not a friend. Don't be afraid to use the word "no."

Your children won't care how much you know until they know how much you care. If you're too busy to spend both quality and quantity time with them, what you say won't carry much weight. Shut down your devices, and be present.

3. Think about your child's stage of life and help him with what comes next

Religious leader and teacher Brad Foster tells the story of a young man named Pablo, from Mexico City, who said he owed his solid values to his dad. This is part of what Pablo told Mr. Foster:

"When I was nine, my dad took me aside and said, 'Pablo, I was nine once, too. Here are some things you may come across. You'll see people cheating in school. You might be around people who swear. You'll probably have days when you don't want to go to church. Now, when these things happen - or anything else that troubles you - I want you to come and talk to me, and I'll help you get through them. And then I'll tell you what comes next.'"

"Well, he warned me about pornography and dirty jokes. When I was 11, he cautioned me about things that could be addictive and reminded me about using my agency."

Mr. Foster was impressed that Pablo's father was such an intentional parent. He offered this observation. "Here was a father, year after year...who helped his son not only hear but also understand."

Decide what's a "big box" for you - behavior that's non-negotiable - and what behavior can be treated as a "little box." If you don't pick the important battles, you may find yourself overreacting to everything your child does, and you'll lose him.

5. Teach respect for others

The golden rule is as relevant today as it ever was. Teach kids to treat others the way they want to be treated. Don't raise an entitled child by giving him everything he wants, when he wants it.

Let her learn from her mistakes. Every child makes them. Let her learn how to do things for herself. Don't be a "helicopter parent."

7. Instill confidence in your children

Encourage them to be all they can be. Cheer them on. We all respond to encouragement.

Intentional parenting has the potential to instill family values, not just in our children and grandchildren, but in generations to come. 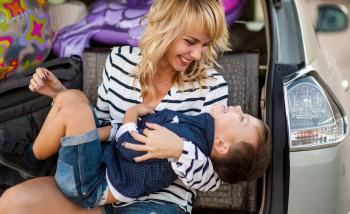 Quiz: What Kind of Mom Are You?