7 simple ways to say ‘no”ť to your little angel

It's so Hard to Say "No"ť to That Face"¦.but It Needs to Happen.

Big eyes and a quivering lip are difficult to deny. But kids need you to say no. They won't tell you that outright, but parents have to set boundaries. Marriage and family therapist Lori Freson explains: "children are not emotionally or developmentally equipped to make major decisions or rules". Though it can be difficult to let your little one down, saying "yes" all the time isn't going to do them any favors in the long run. While it may seem easier to skirt the question or give in,doing so means your kids live in confusion and chaos, unsure of boundaries or discipline. Despite tantrums, pleading, begging, or manipulation, kids need to be told "no". Though it's going to be difficult, here are 7 ways to make it a little easier:

There might be tears and tantrums to follow if you just answer with a flat "no". Sometimes these outbursts after hearing "no" are because your kid feels like their opinion hasn't been heard. Giving an explanation to why you are saying "no", and letting them explain why they want to stay home instead of going to soccer practice can clear up any confusion. You might end up having a rather interesting conversation you would have cut out by saying just plain "no".

There is no way you can stop your child from wanting something, but you can do more than just say "no" when you are being peppered with "can I have this??" a dozen times. Letting children explain why they want something is the first step in this process. Next, help your child make a plan to get what they want, and/or explain that ice cream isn't something they really need before dinner. Doing this can help your kids feel listened to instead of just shut down.

Having structure and order is important in a child's life, which means you need to be consistent no matter the situation. Not giving in when things are going well and everyone is in a good mood is just as important as holding your ground when there are tears and screams involved. Letting bad behavior in the grocery aisle only reinforces manipulation as a way to get what your child wants. Being consistent doesn't mean you say "no" all the time, it just means you don't let crying and whining convince you to give in.

Saying "no" might not seem like the perfect opportunity to play a fun game with your kid, but think again. If your little girl is asking for a day at the park when errands need to be run, explain why today isn't a good day for the park, but then be quick to reroute disappointment. After explaining why today won't work, ask her what she'd like to do next time you guys go to the park and what she'd like to do instead after you both get home from running around. Being creative and having fun imagining what a day in the park would have been like can often be enough to stave off disappointment at being told "no".

"If you don't get me this, you don't love me" is a heartbreaking claim you know isn't true, but it's the card your child chose to pull when you said "no" to their request. It's difficult to hear, but does give you the chance to make sure your reasoning and love is heard more than the "no" part of your explanation. Keep it short, but ensure that your child knows love isn't based on a purchasing a tiny toy advertised on television.

6. Don't be on autopilot

Saying "no" shouldn't be an automatic response. If that's your go-to answer, it won't have as much power when you really do mean "no". Especially when kids get older, saying "yes" to a night out at the movies with a friend so you can say "no" to a party at a house with no parents home. Learn to pick you battles, while still setting understandable boundaries.

Kids won't even ask for candy at the check out aisle if they know that's not even an option. Being clear about what is expected when runnings errands ("you are welcome to join, but we will not be stopping off at the park, and we will not be buying anything not on my list") will eliminate the need to even say no.

Yes, there will be moping and disappointment after being told "no", but your kids will move on. Kids are resilient little people; sit back and watch as tears quickly dry and attention is soon diverted to something else. You might not be able to see a lesson in resilience, communication, and character building when you say "no, but that will be there, too"Â¦it's just harder to see. 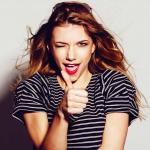 10 Ways to Feel Instantly Beautiful (Even on…