Motherhood is a Roller Coaster Ride, and It's Only in Retrospect That I've Figured Out What I Should Have and Shouldn't Have Done!

The first time my firstborn laughed, he laughed because I was sobbing. I think it was in that moment I realized through the haze that I had grossly underestimated the roller coaster ride of motherhood. Now that I'm 40 and on my fourth baby (who's four months old), I've had enough experience to know exactly what not to do.

1. I would have never underestimated the power of knowledge

I had no idea what I was doing, and my first-born knew it. He was loud, wet, demanding and mad at me for not better care of him. I was sleep-deprived, battling postpartum depression, and only had enough money to buy a book on how to care for infants. I soaked up everything I could learn as fast as I could. In retrospect, it's interesting how suddenly my baby overcame his "colic"; for future children, I was better educated.

2. I would never stress that much again

Having a baby is overwhelming. I knew I would be exhausted but didn't know exactly how exhausted until I was a new mother. I wish I had known that I could embrace the exhaustion and stress. Instead of trying to "catch up on my sleep" (that still hasn't happened, eleven years later), I should have chosen to accept that season of life. I wasted so much time worrying and stressing about things out of my control that could have been better spent enjoying my newborn baby.

3. I would never try to take on more than a few tasks

When there's a new baby in the house, you switch into "survival mode", where the only things that are absolutely necessary are:

I tried to do everything (perfectly) and instead, failed at everything. It's okay that food is edible and not gourmet. It's okay not to get everything done and it's okay to sleep when your baby sleeps. Looking back, I wish I had been more open to accepting help. I should have asked for help a lot more than I did.

4. I would never ever neglect my own needs

In fact, the minute I realized I was neglecting my own needs, I should have made priorities to take care of myself.

5. I would never criticize my husband's help

My husband actually seemed to know more about babies than I did (which wasn't hard since I knew nothing)! Instead of appreciating his help, I seethed on the inside because I felt he couldn't do anything right. I regret that so much. I still struggle with this, and have to remind myself that he's their dad. He might do things differently, but there's a reason kids need two parents. I had a learning curve, and my husband had one too. He had to grow into his role, and I had to let him.

6. I would never let my opinion overrule my mama instinct

I only had a few times where people said something about my parenting, but it weighed me down. I wanted to do everything right (breastfeeding, creating sleep patterns, not "spoiling" the baby, etc.), but it wasn't until I stopped worrying about what everyone else said, and followed my instinct that we were all much happier.

7. I wouldn't never buy so much stuff

I thought I was "prepared" for my baby, but I was over-prepared and had spent a fortune getting that way. The swing and the bouncer? He hated them. The cute new outfits? He spit up on them. What a waste! I have two words for new moms: thrift store. Oh, and hand me downs.

While your fourth baby is much different than your first, there are some things that don't change. It's so much more fun being a mom now that I know what to do!

Austin is a stay-at-home mom with four busy children. When she's not chasing children, she's working on her latest font or scripture journaling design.
nextarticle 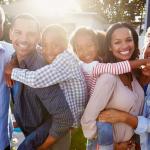 10 Things You Should Say to Your Son-In-Law