7 Things Starlings Taught Me About Parenting

We Can Learn so Much From the Animal Kingdom if We Pay Attention. Here is What a Pair of Starlings Taught Me About Parenting.

Some time ago I lived on a farm in Harford County, Maryland. I used to marvel at the starlings in their flight. They would pepper the sky, and it almost seemed as though the flock was rolling like a wave. Their motions were so fluid and well-choreographed. Then they would descend on my lawn. I could barely see the grass because there were so many.

One spring, in our garage on the garage door fittings, a nest appeared. We were careful not to disturb it and simply kept the garage door open. We watched with great anticipation as the parents, a mated pair, added twigs and string to the nest as well as their little eggs. They kept a careful vigil; never both leaving at the same time. One always sat with their offspring.

After a few weeks, we saw the babies poke their little heads out of the shell, then out of the nest. The starlings seemed to know and trust us and allowed us to climb and peek.

As they grew in their feathers, the day came when they needed to attend flight school. We watched mama bird on one end of the frame, dad on the other with the little ones in between. They gave their instruction, demonstrated, then nudged them off.

This production continued a couple of times a year for a few years. I would take breaks from my housework and writing to sit out in the garage on a lawn chair and watch with wonder at the whole process. Here's what I learned:

Though this is a practice I didn't have the privilege of being a part of, it is one that I wholeheartedly believe in and outspokenly endorse. These birds mate for life. They stay together no matter what. I found a lovely story about a starling couple.

"I once was witness to a young boy shooting a female starling. I have never forgotten what happened next. A larger male starling, obviously her mate, landed next to the dead female and sounded a distress call, flapping its wings in challenge. It put itself at risk with its courage. The boy slowly approached. The male starling stood his ground trying to protect his mate. Finally, when the boy was just a few feet away, the grieving bird flew off. Here was a bird that is considered a common pest that is poisoned by the thousands, clearly showing signs of loyalty and courage."

The little hatchlings witnessed the unity of two parents who share a common goal and a dedication to properly rearing their children together. They don't quit, and they don't argue in front of their children about how they are going to do things.

During the parenting season, these two were completely focused on the task at hand. No outside distractions took them away from what they were to do: parent. They knew if they did the job properly and invested in their mutual project, they would turn out productive children.

These parents would sit on either end of the railing and periodically fly off and out of the garage where they would fly in circles to show the frightened little ones that it could be done. They never seemed to tire of showing them the right way to do things.

Encouraging them to fly

I don't speak starling, but I'm sure that the twittering they did was encouraging their little ones to fly and to be all that they could be. No lingering beyond their time at home; just to get out there and carry on the starling tradition. At first, the little ones would hesitate. I could see them back away from their parents. But the mom and dad would sidle over to them. Then they would go out a few more times to show them how it was done.

Push them so that they know what they are capable of

Occasionally, there was one or two babies that would simply not take the plunge. At that point, after exercising extensive patience, the parents would give the little ones a nudge and push them off the bar. There was no choice but to fly. And, fly they did. They would do a few laps, then come back for praise.

Once flight school was over, there was no question that the parenting was complete. They had done their job. Without apologies, they let the fledglings go off to grow up and begin their own mating and childrearing.

This was a sad day for me. But I believe the starlings probably rejoiced and took a little vacation before beginning the next batch. The offspring did visit, but never stayed for long before flying off again. The starlings knew their job, performed it admirably, then began again. They taught me a pattern of parenting with their patience, demonstration, encouragement and gentle nudging. 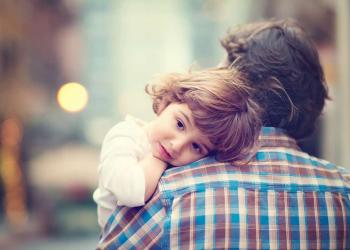 3 Important Traits That Amazing Dads Have in…