7 ways to win a fight with your toddler

Fighting with a toddler feels like reasoning with a monkey, but don't lose hope. Follow a few simple strategies and win that next fight!

You thought nine months of pregnancy was hard? Twenty-four hours of labor was tough? Months of round-the-clock feedings and constantly interrupted sleep was exhausting? Well, prepare yourself - because it only gets harder during the toddler years.

True, you won't be physically uncomfortable, and you'll get more sleep with a toddler, but you'll have to come up with answers to questions like, "Why does kitty have a tail?" and "Where do babies come from?" You'll be chasing a naked little body around the house, hoping to catch it before the carpet is soaked with pee. You'll have to reason with your toddler - who won't think much of your judgement and will have a lot to say for himself!

During your adventures, some things you'll have to figure out on your own, but there are strategies you can employ when it comes to winning fights with those stubborn little creatures who have turned your life upside down.

1. Scream louder than him

Have you noticed how very ear-piercing the screams of a toddler can be? If you haven't yet, you will. If you take his scream as a challenge and scream back at him, you'll soon both have lost your voices, precluding further argument. Of course, responding in kind will also teach him screaming is an OK way to communicate. So, despite your frustration, try to keep a calm, quiet voice even when your toddler is screaming. Toddlers learn by example.

because not only will she fear Santa, she might decide she'll never be worthy of the nice list anyway, so she might as well be naughty; it's easier. Don't use Santa as a deterrent to bad behavior, or Santa will begin to seem like the bad guy rather than someone who symbolizes the happiness and joy of giving at Christmastime.

3. Stand on the table and pound your chest

This, or any other show of force (pounding the table, lashing out, etc.) is how creatures in the animal kingdom exert their authority over others, so it should work for you, right? Well, for humans, using force as punishment or acting aggressively during arguments is just another example you're setting for your child. Model the type of problem-solving behavior you want your toddler to have. He won't understand it right away, but he will imitate what you do and say.

After all, if you can't hear an argument, is it actually happening? Unfortunately, it is, and your toddler is likely to start believing you don't want to hear what she has to say. It's tempting to just tune out during a fight, but your toddler can tell when you're emotionally present. Don't let her think you don't care how she feels.

As if your toddler needed another reason to prefer Grandma over you, now you've made yourself the bad guy. Using the "telling grandma" threat undermines your authority because it teaches your child there is a higher power than yourself. He'll be less likely than ever to listen to you and more likely than ever to turn to Grandma for protection.

6. Ground her from the TV, toys and friends until college

In a moment of anger, you might be tempted to take away all privileges, but promising vague threats or long-term retribution won't sound impressive to your toddler. She doesn't have much of a concept of time besides how long it's been since she last ate. Plus, when she sees you don't follow through on your threats, she'll never take you seriously. Instead of grounding, use the "time out" method, placing your toddler somewhere she can't play. The length of time should depend on her age - one minute for each year old she is.

7. Hide in a corner sucking your thumb and cuddling with a blanky

When toddlers throw tantrums or point-blank won't listen to you, sometimes you'll want to throw up your hands and shout, "I give up!" Maybe if you ignore the problem, your toddler will grow out of it. While there are things he'll grow out of, your toddler still needs your guidance. He's testing his boundaries and needs you to show him the line between right and wrong.

Don't check out, even when the going gets tough. Your toddler needs you now more than ever. Focus less on who "wins" each fight, and instead consider what your toddler is learning from your example. 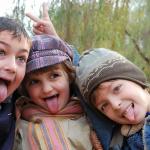