7 ways you are ruining your child’s life

The road to hell is paved with good intentions. And the path to adulthood can be a treacherous one for kids when parents say these 7 things.

Believe it or not, the best of intentions can go awry when it comes to parenting your children. Here are seven "good things" you might be doing that are ruining your child's chances at a healthy adulthood:

This saying never has worked, and never will work. Your kids will do as you do, no matter how much you urge them not to. If you smoke, she will likely smoke. If you drink or abuse drugs, he will too. If you over or under-eat, she will follow suit. Kids developing unhealthy habits starts at home with you. If you want your daughter to have a healthy relationship with food and a positive body image, show her how. If you want your son to deal with his problems instead of smoking, drinking or drugging them away, give him resources and coping skills to do so.

Beyond modeling bad behavior, directly teaching your son or daughter unhealthy habits you think are beneficial can create real chaos on his or her way to adulthood. Teaching your son unhealthy eating habits that represent family bonds and tradition, or teaching your daughter unhealthy relationship routines that become breeding grounds for neglect and abuse may seem normal, but are not. There is a big world out there and your child has the right to go into it with the expectation of being healthy, happy and respected.

Making excuses for engaging in or directly teaching bad behaviors is unacceptable. Parenting is a verb that requires action, and needs to be taken seriously. Think about the true, deep affects your childhood experiences had on you, and make conscious changes to do it better. Just because you were spanked, whipped or worse does not give you the right to subject your child to what many now consider borderline abuse. Putting soap or hot sauce in your son's mouth may clean up his act, but can cause serious irritation or toxicity if swallowed. Think before you automatically revert to how things were done when you were young.

Especially when considering your growing sons, teaching your child to repress his feelings will only make his happiness in life and love difficult, if not unbearable, in the future. Far from whining, allowing your son or daughter to openly express his or her feelings, then acknowledging those feelings and asking how you can help will do a world of good. Repressing those feelings will only make him feel misunderstood and dismissed.

Talking, especially to a professional counselor or therapist, is vital when your child has experienced loss, abuse, emotional upheaval, confusion or abandonment. Not talking about what happened and how she feels will cause her to cope in unhealthy and often destructive ways. Not talking doesn't make children stronger; it makes them sad and angry, and often causes acting out.

No one succeeds in life strictly by him or herself. You need help. You deserve help. Sometimes you will get it without asking, but teach your child to be brave enough to ask for assistance with his head high; and be ready to pay it forward when he can stand on his own. There is no shame in building your lives, communities and connections together. Everyone needs someone to lean on now and again. So, as long as you are teaching your kids the value of hard work, keep the "shame" of asking for help out of the equation.

Children lie; this is a fact of life. And once your little angel has morphed into "the boy who cried wolf," it is easy to take anything serious they confess to you with a grain of salt. Fight this urge to dismiss what your child says about what happened to him, or what he witnessed. Your first duty at the spilling of a secret is to believe him. After that, if necessary, involve the authorities, or ask non-leading, open-ended questions if the revelation is not a criminal act.

You may feel that ignoring your kid's accusations will teach him about lying, and punish him for past misdeeds. But it only punishes him in the present for telling the truth. Revealing something traumatic can be traumatizing itself. And being belittled or not believed can cause even deeper wounds and leave deeper scars.

Not trusting or believing your child has been abused or taken advantage of in some way can have devastating and life-long effects. I've seen this with my own eyes. There is something broken and shattered in the hearts of these adults. And the relationship now had with that parent is never the same. Always believe, then get to the bottom of the story; because the consequences of not believing something that did happen are far worse for your child than the consequences of believing something that didn't. 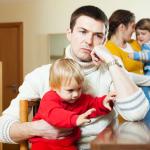 The Truth About Divorce