Having a Birthday on a Leap Year Could Be Kind of a Struggle, Right? Well, These Families Know the Struggle All Too Well.

Leap year is something that occurs every four years to make up the difference in our 365-day calendar. It specifically accounts for the extra amount of time - five hours, 48 minutes, 45 seconds - that the Earth spins around the sun that isn't included in the normal 365-day calendar.

Having a birthday every four years sounds like an oddity, but it's a very real probability. In fact, close to 187,000 people in the United States celebrate a leap year birthday on Feb. 29. The odds of having this day as a birthday are 1 in 1,461.

There's a unique paradox with having your birthday on a day that only exists every four years, according to The Atlantic's Daniel Nester. For one, it means your body's age isn't your actual date-based age. And it means sometimes thinking about life in a different way. Like with the Olympics or the World Cup, babies born on a leap day tend to think of their life in pockets of four years, rather than just every year like the rest of society.

"I can't help but think about my life more deeply every four years," Nester wrote. "Thinking in four-year periods isn't uncommon - we have summer Olympics and presidential elections on leap years, after all. But, each Feb. 29, I pause to take a life inventory; 16 to 20 marked the time from high school to college. From 36 to 40, I became a father and moved out of New York City."

But not everyone is happy with the leap year birthday. Some will claim March 1 to be their date of birth as a sign of protest. Others get frustrated when Facebook sends a happy birthday notification on Feb. 28, even though that isn't their actual birthday.

Regardless of when these leaplings celebrate their special day, though, there are a number of them out there who are sharing their stories online. Here's a look at eight families who are honoring leap year in 2016.

You read that headline right. A 24-year-old mother in Newport, Wales, just celebrated her sixth leap year birthday by giving birth to her own leap day son, Nevaeh, according to ITV. The mother, Nichola Davis, was born on Feb. 29, 1992, which means she's technically only celebrated six birthdays.

Moving forward, though, her celebrations won't be alone. She and her son will have the opportunity to honor their birthdays together, creating a unique family tradition.

"It doesn't feel real. I don't know how I feel. I'm tired!" Davis said. "My midwife kept saying 'she'll come on your birthday.' She was hanging on."

This woman knows the secret to staying young

That's the question she's often faced with, according to USA Today. Taylor, who loves the idea of a leap year birthday because it's uniquely her own, told USA Today that she's often questioned about how old she claims to be. And, in all cases, she says she's 24.

Seems like she has found the secret to staying young.

The 1 in 3 billion family

You really can't make this stuff up.

Over in the United Kingdom, Eric Keogh, his daughter Bethany Wealth and his father Peter all celebrate leap year birthdays, something that defies 1 in 3 billion odds, according to The Mirror.

More than just defying the odds, Keogh and his family are also the only known trio in the world to have leap day birthdays across three generations. Keogh is secretly hoping his daughter will have a child on Feb. 29 in the future, making the family the only one to have four generations of leap year babies, too.

"People are always interested when you tell them you're a leap-year baby," Keogh told The Mirror. "Then I watch their faces drop as I tell them my father was also born on Feb. 29 and - wait for it - so was my daughter. It's quite nice being unique."

The Burford family has the leap year thing on lock

Even though the Keogh family has three generations of leap year babies, a family from Ontario, Canada, has three babies who all have the same Feb. 29 birth date, too.

This started with Gil Burford, who was born on Feb. 29, 1924. His great niece Trish Burdford-Mactier was born on the same day 48 years later and his great-great-niece, Moira Cool, was born just four years ago, CBC reported.

When siblings have the same birthday

Speaking of record-breaking families, the Henriksen family in Andenes, Norway, have a world record for having three children all with the same birthday - Feb. 29.

According to The Local, siblings Heidi, Olav and Leif-Martin all share the same leap day birthday, with all three of the children having been born four years apart starting in 1960.

The family considers themselves to be minor celebrities because the record is talked about every four years around leap day.

"I don't tend to announce it, but when I do say it there are many who can't believe it. And I can understand that - the odds for it are sky-high," mother Karin Henriksen told The Local. "It's probably a bit more special for others than for us. I think that has something to do with the fact that we didn't contribute directly to the records ourselves."

Waiting for your birthday is tough enough. But for siblings Lana and Robyn McKeon - who both celebrate leap year birthdays - it's been especially harrowing, according to The Independent.

Sometimes the McKeons will celebrate the girls' birthdays on Feb. 28 or March 1. But when that elusive Feb. 29 comes around, the celebration is huge for the Irish sisters, The Independent reported.

"We usually say their birthday is either Feb. 29 or March 1, although once the end of February comes around they say it's their birthday," mother Suzanne McKeon told The Independent. "The day after we would have the party, the older one used to say 'my birthday is actually today mummy' to try to have another."

The 18th birthday is a milestone birthday. You're finally a legal adult.

For John Wheeler, his 18th birthday was almost 72 years in the making.

Wheeler may technically be older than his true age many say, but it doesn't matter. He said he enjoys his leap day birthdays the most, and will usually make celebrations a little more special, according to Oxford Mail.

"I feel like I only ever really want to celebrate on my true birthday, rather than the other three years when it doesn't appear on the calendar," he told Oxford Mail. "It doesn't feel like much of a celebration then, although my family always do something to celebrate."

Dick Vitosh lives life rather simply: as a teenager.

He spends much of his time playing guitar, checking out cars or bowling - all hobbies and interests he picked up when he was younger, according to The Iowa City Press-Citizen.

And it sort of makes sense. Even though he's technically 80, his real age is 20, The Press-Citizen reported.

The birthday is especially important to Vitosh because his twin brother, Russell Vitosh, who died in 1979, was also born on that day. The two would grow up participating in family traditions, like when their family would send photos to the Press-Citizen for publication.

It's a special day for Vitosh, one he would never change.

"I would never change that. That leap year is something that's special," he said. 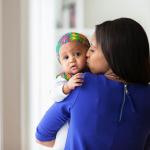 5 Mental Parenting Roadblocks and How to Avoid…