My own parents are mortified by some of my parenting. Looking back, I am a little mortified at some of theirs.

I walked to school on my feet. This fact blows my children away. Not only was I the captain of my own shoes, but I was in charge of getting my younger sister there as well, and of making sure she got to class without loosing her coat.

I have, on occasion, let my own kids walk home from school together, though I'm sure I am a little more nervous about it than my parents were. I was an AT&T parent. I fathered by phone. Occasionally, when I see a policeman walk towards me I expect to be cuffed for that crime. I'm too pretty and too old for jail.

Today's headlines feature parents who, gasp, let their children go to the park unsupervised. That sort of sordid parenting even has a name these days. It's called free-range parenting. My parents may have had to do a little time in the big house for the same thing.

Today, as a rule, kids don't walk to school. Even with buses available, the parent as chauffeur is all the rage. Of course, as a child I wasn't scheduled out for karate, piano, soccer, pottery, beekeeping or Lil' Republicans. If I couldn't walk there, it wasn't in my schedule. Transportation is one thing my daughter does much differently than my parents did.

My mom took photos of us and our naked little behinds in the tub or in the back yard running through sprinklers on a hot afternoon. If someone were to post this type of photo today there better be lawyers standing by. Our sensibility has evolved.

My car seat as a child was the actual seat in the car. There was no booster chair. My booster was, by definition, the person who boosted me. There was a seat belt, however. And we sat in the front seat where mom could keep an eye on us as there were no airbags to be concerned with.

Waiting in the car

Mom ran into the store for five minutes and we waited in the car. Five turned into fifteen. It was such a bother and as boring as all get out to sit in the car and wait, but it was not illegal.

We sat in the car or danced in the car or sang in the car. It was a treat when she would leave her keys behind and we learned to mess with the radio. If it got hot, we rolled a window down. In some states, it would be mamma in jail for allowing youngsters in a car supervised by a person not aged at least 13.

If dad was driving there may not even have been seat belts involved, especially if we were in the truck. Often during the summer my place was in the back of the pick-up with the dog — who was not strapped in either. If we were going fast I just made sure my shirt was buttoned and that I held onto the spare tire.

If we didn't get to go on a drive with the parents, we stayed home. My sister was chief baby sitter at the age of 7. She warmed up the soup and got us to bed. She barely could reach the nobs on the stove without a stool. No one ever suggested that my parents were slackers or irresponsible. Today I wouldn't leave a seven year old in charge of anything other than the phones, DVDs, IPads laptops or any thing electronic or programmable. I might want to re-think that.

My parents had common sense and a majorly conservative and responsible upbringing themselves. I didn't even hear of alcohol until I was old enough to ask what champagne bubbles were. Smoking was something that I learned about when I frequented the barbershop and the woman weren't around. Language got a little coarse but my dad's demeanor and language stayed the same. I wasn't a child who drank and smoked or cursed before I hit Jr. high school, except for once in the second grade when my head was wrapped with duct tape after I repeated something that I shouldn't have.

Another thing I don't want to talk about. Today it makes the internet news and Facebook. Everyone gets to vote whether it is PC or not, and sometimes the police are involved. Do I remember the humiliation of carrying the sign around when I stole from my sister? Why, yes I do. Could I have learned my lesson in another way and have lived to tell the tale. In hindsight, maybe so.

But that was a different time. 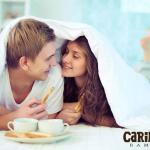 10 Things Every Husband Needs to Do For…