Are You Overlooking What It Takes to Raise a Successful Child?

Emotional intelligence, or EQ, means being aware of both your own emotions and the emotions of those around you. It also means controlling those emotions and using them to connect with others.

Studies show those with a healthy emotional intelligence have higher self esteem, more empathy, score higher on SAT scores and have higher chances of financial success.

Isn't this what every good parent wants for their child? Here are a few ways to help you develop this ability in your daughter:

1. Let her play by her own rules

All day, your daughter's life is filled with rules.

"You can't have dessert until you eat your broccoli."

"Put your coat on. It's cold outside."

Those rules are obviously important, but playtime should be free from rules. Playtime is her kingdom of imagination. She is the queen, and in her kingdom she should be the rule maker.

Playing like this develops leadership and problem solving skills, and the creativity promotes healthy brain development, according to Denise Daniels, a child development expert who specializes in the emotional and social development of children.

Let her choose what she plays and how she plays it.

2. Label her emotions with words she knows already

It wasn't until I was 20 that I realized the squirmy, uneasy feeling that would sometimes creep up on me had a name: anxiety. Learning its name gave me power. The power to identify triggers, develop healthy outlets and select a better response.

Learning to label her emotions is easier for her if you are explaining your emotions too - both big and small. When you feel sad, she will learn to see what body language you put off with that emotion. Identifying positive emotions is just as important as identifying the negative ones.

4. Never blame your emotions on her

Your emotions are your own. No one can make you feel a certain way. You (and your brain) decide how to feel. As you discuss your emotions with your daughter, make sure you're never blaming her.

It's damaging to children when you push aside something that triggers a deep emotion in them. Telling your daughter she shouldn't feel sad when her brother hurts her feelings or shouldn't be scared of the dark isn't helpful. It makes her feel like there is something wrong with her.

6. Think before you speak

Often those emotionally invalidating comments come in the heat of the moment before you have time to filter your response. Pause before you say something that could be hurtful. Slow down and form a healthy response to her misbehavior rather than angrily demanding, "What were you thinking!?"

7. Figure out the why behind her actions

When your daughter is naughty, figure out which emotions led to her actions. Was she being devious intentionally or just bored? Was she mad at her sister or scared? When you understand the cause, you can choose a more appropriate way to discipline her (if needed).

Your daughter needs to know she is in trouble because of what she did - not because of how she felt. Make sure she knows it's OK to have those feelings. Part of emotional intelligence is identifying those feelings and then dealing with them in a healthy way. She'll eventually learn to take different actions when those feelings creep in again.

9. Remember, she deserves respect too

In everything you do, treat her with respect. She is a little human. You don't like being ignore when you're talking, and neither does your daughter. When she speaks, pay attention. 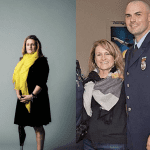 After Losing Her Leg in the Boston Marathon…