Don't understand what your teens are talking about half of the time? This glossary should help.

Editor's note: A version of this article was originally published through the Gwinnett Daily Post.

It has been reprinted here with permission.

Each era produces its own slang. Some terms demonstrate staying power and become part of the lexicon while others are relegated to the dustbin of linguistic history. Perhaps the greatest coinage of my generation, for example, was "cool," which is still, well, cool-even if it faces competition today from "awesome" and "chill."

The term "bird," to describe a smart yet awkward person, did not survive, but "nerd" and "dork" are still doing fine. And although a good-looking woman can no longer be called a "fox," "babe" is still appropriate (if politically incorrect), especially when preceded by the modifier "total." (Author's note: my wife is still a stone-cold fox, regardless.)

Perhaps some of you have enjoyed a nice walk down memory lane, recalling the long-forgotten lingo of your youth. But today's slang probably seems foreign to you. As a keen observer of both teenage behavior and language, I've put together this little glossary for your benefit:

A photograph taken of oneself, usually with a cell phone and sometimes together, with another person. May be accomplished by holding the phone away from one's body or by photographing oneself in the mirror. Usage: "President Obama took a selfie during the Nelson Mandela memorial."

This word once referred to the handle portion of a socket wrench set. No more. Now it means ugly, out of style, or "like a poor person." As far as I can tell, it derives from an intentional mispronunciation of the word "wretched."

This word no longer means simple or fundamental; although I suppose, in a way, it actually does. Its modern meaning is similar to "ratchet," but it carries the additional connotation of being cheap or even cheesy. Usage: "His old phone is so basic."

This is one term people of my generation actually do understand (or at least think we do) because we're on Facebook all the time. But of course, being adults, we get it wrong. It's true that the acronym stands for "laugh out loud," but it's no longer used to express true hilarity, which is now spelled "hahahaha." LOL identifies something as only mildly or ironically funny. It's also not just a written abbreviation but is often spoken out loud, usually with sarcasm. For example, my teenager's deadpan, "LOL, dad," at the dinner table.

(By the way, please do not make the common geezer mistake of thinking that "LOL" stands for "lots of love." That can be a pretty awkward way of responding to someone's bereavement, for example.)

Once a shortened form of "swagger," this term now refers not to an individual's walk but to his or her accoutrements: jewelry, fancy clothing, etc. It can also mean "free stuff" (like T-shirts, sunglasses or Rolex watches) given away to members of an organization or attendees at an event. Usage: "You should see all the swag state legislators get from lobbyists."

Perhaps this should be spelled "BAE" because it's actually an acronym for "before anyone else," but it's pronounced as a word (sounding like "bay") and employed as a noun. Teenagers these days use it in much the same way we once used "squeeze" (as in "main squeeze") referring to someone's "one-and-only." Usage: "I'm going out with bae tonight."

So there you have it. Even though your own youth is long past, you can now sound cool again. Just be sure to wear your swag so you don't look ratchet when you take a selfie with your bae. LOL. 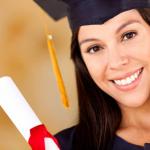 Why I Got a Degree When I Just…