Every Child is in Need of a Good Father, One Who Will Take the Time to Know His Child and Love Him. Why is a Father so Important? Here Are Five Truths About Fathers.

Friedrich Nietzche wrote, "Whoever does not have a good father should procure one." In a world where the role of the father is downplayed, and many fathers have abandoned their responsibility, Friedrich Nietzche had it right. Good fathers are needed. They are vitally important to the happiness and success of every family. There are many reasons why fathers are important, here are five truths that stand out to me.

1. Fathers are the knight in every daughter's fairy tale and the hero in every son's comic book. Sigmund Freud said, "I cannot think of any need in a childhood as strong as the need for a father's protection." A child who knows they are protected can grow up feeling safe and secure. Emotions are strong in childhood, and often fear is one of the strongest emotions of all. Nightmares haunt every child's sleep and monsters lurk under the bed and in the closet. It is daddy that a child runs to for protection from the darkness. A daddy's arms are strong and fearless and to a child, they bring safety and peace. "A truly rich man is one whose children run into his arms when his hands are empty." Author unknown.

2. Fathers are the greatest example when they think no one's looking

Theodore Hesburgh once said, "The most important thing a father can do for his children is to love their mother." Without even a word, a father shows his children by his actions how they should respect and love others, especially their mother. Because it is the mother who will be doing much of the teaching and nurturing in the home, this one simple act will do more for his wife and children than anything else. By nature, children respect their father, and as they watch his actions, they desire to walk in his footsteps. His example can have much more of an impact than his speeches. As Clearance Budington Kelland said, "My father didn't tell me how to live; he lived and let me watch him do it."

3. A father's counsel can live on forever

Jean Paul Richter said, "The words a father speaks to his children in the privacy of home are not heard by the world, but as in whispering-galleries, they are clearly heard at the end and by posterity." A father has the ability to make or change the traditions of his father. A father's words to his children can perpetuate hate or they can nurture tolerance. They can be responsible for abuse, or they can cultivate love, charity and compassion. It is the words of a father that stay in their children's minds long after they have left home, and it is the traditions of their father that they look to when grown children are creating traditions in their own home. George Herbert said, "One father is more than a hundred Schoolmasters."

4. A father's perspective fulfills every child's need for exploration and adventure

Louise Kaplan said, "Fathers represent another way of looking at life - the possibility of an alternative dialogue." While mothers focus a great deal on raising perfect children, fathers have a different perspective. They let children dress themselves, choose their own breakfast, jump in mud puddles and swing on ropes tied to the rafters. Half of the time, fathers are swinging on the ropes with the children. Fathers allow children to explore and give them freedom that usually isn't allotted them by their mother. This different perspective is good for children because it gives them the opportunity to explore, to go on adventures, and to live in their make believe worlds. I will be honest, in our home, daddy is the fun one, because of his ability to be a kid, just like them. Angelo Patri said, "The father who would taste the essence of his fatherhood must turn back from the plane of his experience, take with him the fruits of his journey and begin again beside his child, marching step-by-step over the same old road." Fathers have the ability to walk step-by-step and hand in hand with their children as they grow, laughing and giggling every step of the way.

5. Fathers are an earthly reflection of God

William Wordsworth said, "Father! To God himself we cannot give a holier name." A father carries the name of God himself. There is nothing greater a man can possess. Children learn the very nature of God as they learn what a father is and who their father is. Because they bear the same name, children compare their earthly father to their Heavenly Father, and they begin to assign them the same characteristics. If their father is kind, they believe God is kind, if they feel their father loves them, they feel God loves them, if they feel rejected by their earthly father, often they feel rejected by God. It is a father's duty to help his child learn the characteristics of God by developing those characteristics in himself. For what a blessing it is to bear the name of God. Lydia Child said, "Blessed indeed is the man who hears many gentle voices call him father!"

Every child is in need of a good father, one who will take the time to know his child and love him. William Shakespeare wrote, "Wise is the father that knows his own child." When a father walks with his child each step of the way, not only does he learn to know his child, but he develops an unbreakable bond of love and friendship and he leaves valuable lessons etched on his child's heart. There is no greater gift for a father in this life. Voltaire said it best, "How pleasant it is for a father to sit at his child's board. It is like an aged man reclining under the shadow of an oak which he has planted." For a child, the love of a father can make all the difference. 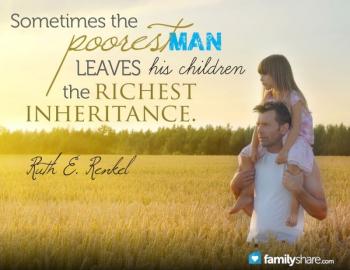 10 Things I Learned From My Father