A letter to my son right before his first date

I know I probably gave you a hard time when you told me you were going on your first date. I probably teased you and told you had to be back by 9 just to be funny. But all joking aside, there are some important things I'd like for you to know.

First of all, as cliche' as it sounds don't be nervous. I know you probably will be anyway but there's really no need to be. You're a great guy with a lot to offer. If she doesn't see that, it's not because of anything you did wrong.

Unfortunately, there are a lot of people in this world who think that if someone doesn't like you then it must mean you're doing something wrong or there's something wrong with you. The truth is, there are A LOT of people in the world. You can't get along with everyone. That's what you're dating for. You know each other on a casual level, and now you're seeing if you like each other on a deeper level. If you two don't click, don't sweat it. Just move on. Like I said, there are A LOT of other people out there.

Make sure to do stuff you like to do. If you focus on her the entire night, you're going to come home feeling pretty disappointed. And focusing on her too much creates bad relationship habits if you two ever got into a relationship. She's important. But you are, too.

Third, dating isn't for sex. Dating is for finding a healthy relationship. This is the 21st century. If you just wanted someone to have sex with you could easily find one. Even though I would prefer you to save sex until marriage, I realize that sex isn't that hard to come by these days.

Fourth, there's no such thing as "the one." As I said before, there are A LOT of people in the world. You might fall madly in love with someone and then she'll end up going for your high school quarterback. Yes, it'll hurt. Yes, you'll think you were made for each other. But then you'll move on. And eventually, you'll find someone who is absolutely fantastic.

Lastly, I can't begin to tell you enough about how proud I am of you. You're seriously a fine young man. You're brave, you're smart, you're funny and you're an all-around good guy. I'm not just saying this because I'm your dad. I'm saying this because I know you better than anybody. And you need to know what you have to offer the world (and what you're offering this girl you're going on a date with).

I know you're only 4 years old right now. But I can't wait to deliver this letter to you in about 12 years. You are a priceless treasure. And you are a true gift to me and anyone else who knows you. 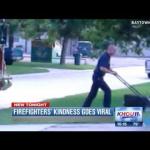