This parenting principle can be summed up in one simple quote.

Dr. James Dobson once shared a parenting principle that changed the way I looked at parenting. He said, "Rewarded behavior is repeated behavior."

If our kids are screaming to get their way and we "reward" their behavior by giving in to their demands, they'll keep doing it. If our kids display positive character traits and we reward them for it, they're more likely to repeat those behaviors too.

I recently saw this principle put into powerful effect for one of my kids.

This week our two older boys had the opportunity to attend Winshape Camp and it was a phenomenal experience.

My oldest son, Cooper, was participating in an activity called "Man Land" where the boys were learning life skills like grilling food, working with tools, tying a necktie and other testosterone-fueled awesomeness. They had a "Man Code" that talked about a man's duty was to love, serve and protect and each day, they awarded a camper "Man of the Day" status (including the privilege of wearing a plastic, championship wrestling belt). To be "Man of the Day" you didn't have to be the strongest or the fastest, but you had to exemplify character traits like patience and respect.

Yesterday, Cooper was awarded "Man of the Day" and as he was validated for those positive character traits (which, honestly, he's been struggling to show lately), he had a renewed determination to carry out those behaviors more often.

Seeing his confidence and determination by that simple act of affirmation and recognition challenged me to look for more ways to "reward" the right kids of behavior. As a Dad, I've made the mistake of too often looking at parenting as simply correcting negative behavior instead of rewarding and celebrating the right behaviors. I need to point out and celebrate the good much more than I dwell on the negative.

I'd encourage you to do the same with your kids. Join me on this quest to bring out the best in our children by rewarding and celebrating their wins and encouraging them to repeat the right kinds of behaviors. Rewarded behavior is repeated behavior. 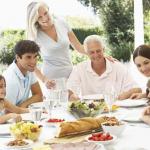 10 Ways to Keep Your Family United Once…